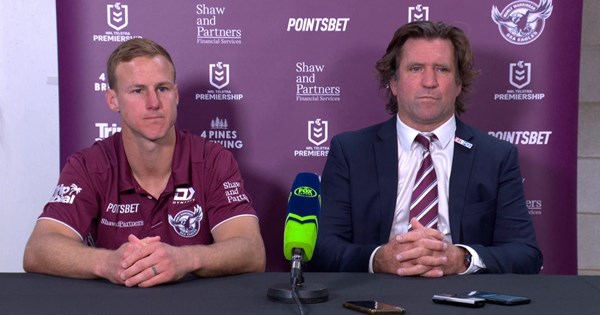 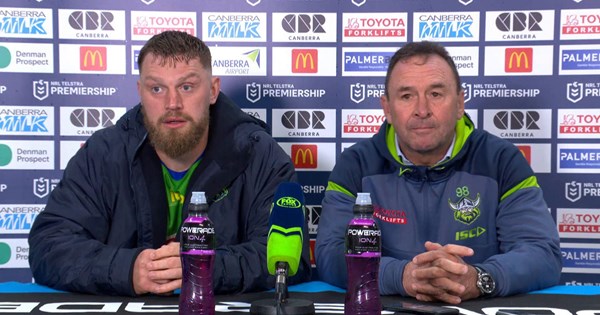 A dominant first half performance has seen the Canberra Raiders record a 48-6 victory over the Manly Warringah Sea Eagles at GIO Stadium today. The Raiders powered past the Sea Eagles on Saturday afternoon to record a 48-6 a victory which sees them jump into eighth place and take control of their finals destiny with a round to play in the regular season. 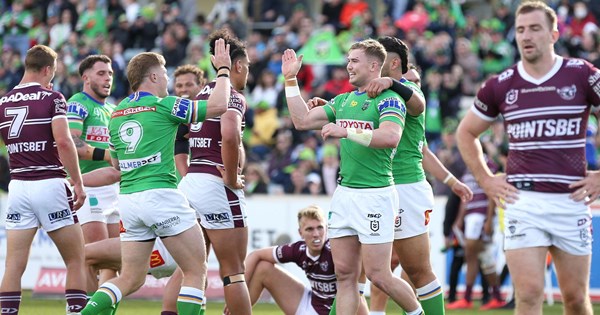 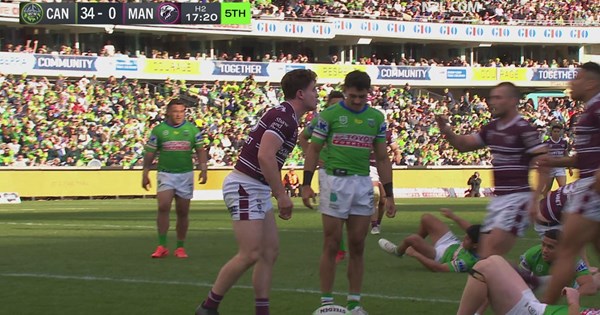 Bullemor gets the Sea Eagles on the board

Ethan Bullemor gets Manly's first try of the afternoon Raiders in box seat as finals race takes turn; Manly ‘look like they don’t want to be there’: 3 Big Hits

Raiders in box seat as finals race takes turn; Manly ‘look like they don’t want to be there’: 3 Big Hits

New Record: Worst ever defeat to The Raiders. That now makes 4 teams since Des return.

Only took 80 minutes for Aloiai to start showing some fight. **** we are a rabble, Tommy and Jake are incredible but I don’t know how they turn this around next year

Raiders are not a good attacking team and they put 48 on the board, plain woeful.

Something needs to change

No excuses. That was total garbage.

Premium Member
Would be an interesting thread , hypothetically if we had to have a clean out who would you keep?

I spent most of the 2nd half talking to daughter about how exy golf is.
Did I miss much........

Sorry state of we are in

The Wheel said:
Well guess that ****s the Broncos so all is not lost
Click to expand...

You’ll get to feel the same way as I do after a few years up here mate.

I’m off soon to knock on a few neighbours doors.

Raiders are not a good attacking team and they put 48 on the board, plain woeful.

What astounds me is that Canberra still aren't very good and really didn't have to do much at all to flog us mercilessly. It is so easy to put 50 (or near enough) on Manly that it has ceased to be surprising or funny. There is simply no fight in this team.

Favourite comedy moment of the game (and there were plenty) had to be the three Manly players (Larry, Moe and Curly Joe) going for the crafty "two drop off, one does the one-on-one strip" play, except they all dropped off, no one attempted a strip and the Canberra player waltzed through the line. Then our bozos (no offence, @BOZO) looked at each other like, "I thought you were going for the ball?"

I forgot the game started at 3, turned on the footy to watch the prior game before manly starts and there we were! 34-0 down

Haven’t done that since the barrett years
But this is evidently a problem with the playing group and available talent.

They are genuinely divided. Better to happen now than at the start of 2023. Shows we got to make some tweaks and majorly change the way we treat the players. Des shouldn’t be loyal when they spit on the jersey, walk the club around and fall over when on the field
Z

After 46 years supporting Manly I’ve never been so embarrassed by the lack of passion, effort and pride. A sad, sad day and hopefully players and people of importance within the club understand how loyal fans are hurting.
S