That time of year, your NSW Blues team!!

It's a bit of a laugh when seemingly the best centre we can come up with is Campbell Graham (who has never passed a footy in his career), and he is picked as a waterboy anyway.
D

Smokin Joe said:
Looking at the side selected I think Fittler might be......Forwards would go alright if it was reffed like an NRL game.Think NSW might be bashed out of the game if it is reffed like an Origin game.
Why the hell do NSW name their side before QLD names theirs?Allows them to make any adjustments to selections based on what NSW do....Unfair advantage or just effing dumb.
Click to expand...

It should be mandated by the NRL.

Each team list should have to drop at the same time

Smokin Joe said:
Why the hell do NSW name their side before QLD names theirs?Allows them to make any adjustments to selections based on what NSW do....Unfair advantage or just effing dumb.
Click to expand...

I think its something to do with daylight saving

SeaEagleRock8 said:
I think its something to do with daylight saving
Click to expand...

Mark from Brisbane said:
No it’s to do with the time / date differential , we are well behind up here ( still getting out of the 1980’s).
Click to expand...

clint gutterbun wasn't named at all!

Woodsie said:
Also, is my memory playing tricks or did Freddy give Turbo a licence to roam a bit last year ... didn't he turn up on the opposite side a few times ? .. something I don't think he would get at centre ... maybe? Possibly? .
Click to expand...

Alls I know if I was a selector is I’d be getting as many Panthers players in there. They don’t know what losing is. Their familiar combinations will work. Cleary and Luai for sure. Yeo, Api, Liam Martin, To’o, Chriton. Burton on the bench.

Call me biased but that will mean two years in a row QLD will get to play two games at home!!

Call me biased but that will mean two years in a row QLD will get to play two games at home!!

So next year you know will never happen but we should Nsw get 2 home games then!!

such a shame if the series is over before game 3.

can you imagine how playing at Townsville and Suncorp is going to under the new rules. One love tap from us high and sent off.

this a huge advantage to QLD now.

Looks like dead rubber in sydney. Oh well another year i dont watch origin. Easily 2-3 sin bins to the blues each game.

shame really. Bankwest would of been perfect instead of Townsville.

Our players won’t be backing up in our Friday night game against the cowboys.

the cowboys unless we get a lot of troops back are going to be very hard to beat.

origin period is going to kill us this year. 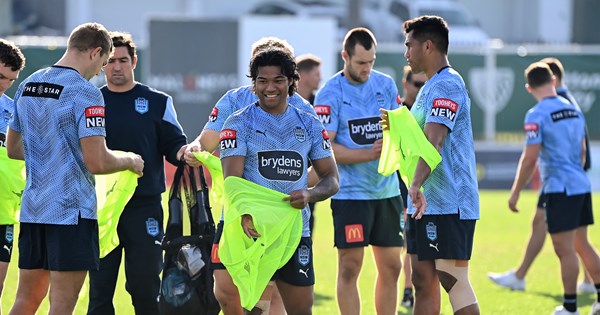 Targeting To'o: Risks and rewards of kicking at NSW 'nightmare'

How pocket rocket stacks up under high ball.

clint gutterbun wasn't named at all!

Parra is so upset the govt is proposing to build them another stadium
Click to expand...

Let's give him a State Funeral

Origin 2021: Almost half of the Maroons side to face NSW were born outside of Queensland

Queensland has been pinching, pilfering and calling star players their own – no matter where they were born – since Origin began way back in 1980. This year they’ve taken it to a new level.

Just when it appeared Queensland may have ingested some much-needed morality, the deceitful Maroons have been sprung again by picking a sham playing squad.

The Daily Telegraph can reveal that seven players - nearly half the Maroons side - were born outside of their beloved Queensland.

Welcome once again to the United Nations of Queensland.

davohan123 said:
Our players won’t be backing up in our Friday night game against the cowboys.

the cowboys unless we get a lot of troops back are going to be very hard to beat.

origin period is going to kill us this year.
Click to expand...

I hope not mate but I’m starting to think the same. Mind you Tgey say backing up two days later is better than on the weekend. I can’t imagine Tom will play but dce and Jake will if not hurt

The Blues have all positions covered in case of injury. Fittler plans to use Wighton as a running backrower from the bench. However, if a back is injured, Wighton can cover five eighth & centre. If a winger or the fullback is injured, one of the centres will cover. If the halfback or dummy half is injured, Luai can cover both positions. If two backs are injured, Murray can cover in the centres. Several of the forwards can play edge or middle, so no problems there.

In comparison, the Maroons have much less flexibility. Capewell, usually a backrower, will probably be selected as a starting centre. If Brimson is fit, he will likely be the bench utility & expected to cover positions 1-7 & 9! If he is unfit, it seems Mahoney will be recalled, or else a new player drafted into the squad. This is the original squad: 2021 State of Origin: Maroons
Last edited: Jun 4, 2021

No injuries in the Blues camp