robbiea said:
A few clubs are now on the lookout for a quality hooker for next year ,I wonder if Matt Parcel will be making any Aussie comebacks soon.?
Click to expand...

I haven't heard anything, but that means nothing. He'd probably want to come home, the money would be better!

A serious injury to former NRL salary cap auditor Ian Schubert has his wide circle of friends concerned the ex-international may have a foot amputated.

Schubert, an experienced motorcycle rider, was involved in a collision with a car in the eastern suburbs on Sunday afternoon and taken immediately to St Vincent’s Hospital.

Gold Coast star Jai Arrow says winning a premiership will be the most important factor when deciding where he’ll play beyond next NRL season.

However Arrow believes the Titans aren’t too far away from contention.

EVEN if Sam McKendry were given a farewell lap this Sunday, he wouldn't be able to walk it.
Or not easily.
No, not with his left knee currently wrapped in a brace.
The medial, likely stuffed.
Not permanently.

And certainly not so bad as that right knee which, after three reconstructions in as many years, is so ruined that nobody, not even doctors, can predict exactly the type of lifestyle awaiting this ageing Penrith prop in retirement.

Although at 30, the likely guarantee is pain.

Same deal for McKendry this week.

Especially after scans late on Tuesday revealed a Grade 2 medial tear will not only prevent him playing in Saturday’s Canterbury Cup finals at Campbelltown, but likely again.
Ever.
Sure, if his Cup side wins through to grand final day, the ageing prop remains a chance.
But if not?

Well, rugby league's forgotten man will then go empty his locker at Panthers HQ — effectively the only club, and life, he has ever known — before disappearing into the employ of whoever wants an old footballer with a new truck license.

Which at a time of cruel farewells, is truly the unfairest of all.

Understanding that after 12 NRL seasons at the foot of the mountains, McKendry not only boasts more years than every player on the current roster, but also Panthers greats like Greg Alexander, Mark Geyer, Brad Fittler, even Royce Simmons.

And how McKendry, over those same dozen years, hasn’t only outlasted a host of fellow debutants from 2008 — guys like Benny Barba, Jamal Idris, Akuila Uate, even Dave ‘The Wolfman’ Williams — but also married, had children, represented New Zealand, torn his ACL three times, had 16 pins and two titanium plates inserted into a broken jaw, been hailed the club’s future, urged to retire, removed from the NRL squad, praised for persisting, shopped around, even played 14 minutes of a Monday Night Football match with his neck broken.

Indeed, if Dally M trophies were awarded for persistence, McKendry could fence his backyard with them.

Which is why this forgotten hero gets no fireworks, no Waterford crystal and certainly no diamond ring for wife Kirsten.

Unlikely, even to get a game this Saturday arvo.

Instead, it now seems his NRL journey ended a week back at, of all places, Laybutt Field, Blacktown.

And on the type of afternoon where, apart from Penrith’s reggies being thumped, so many game balls got stuck on the flat grandstand roof that, eventually, a canteen worker had to go grab spares from his car.

bloody hell this article goes on and on...

Phil Gould will begin a review of St George Illawarra football operations next week after being approached by Dragons coach Paul McGregor.

Gould, NSW’s most successful State of Origin coach and a two-time premiership-winning mentor with Canterbury and Penrith, has more than 30 years experience as a coach, administrator and commentator and is considered one of the most knowledgeable people in the game.

I read that Israel Folau wants to play rugby league for Tonga, but it looks like being blocked by the International RL board.
I can't see why they would refuse him.
He hasn't done anything to harm rugby league - yet.
And the international game needs the best players for their birth nations.

The Who said:
I read that Israel Folau wants to play rugby league for Tonga, but it looks like being blocked by the International RL board.
I can't see why they would refuse him.
He hasn't done anything to harm rugby league - yet.
And the international game needs the best players for their birth nations.
Click to expand...

Just heard on nien news that the IRL approved and he will play for Tonga .

ManEagle said:
Just heard on nien news that the IRL approved and he will play for Tonga .
Click to expand...

This from Peter Beattie:”The RLIF board have made no decisions in relation to any registration request for Israel Folau. As a current member of the RLIF board as the ARLC rep I can assure you that this has never been discussed or mentioned around the board table”@9NewsSyd

Folau is probably not doing himself any favours by getting involved in the mess that is the Tongan team right now:
https://www.nrl.com/news/2019/09/23/israel-folau-launches-bid-to-make-rugby-league-return-with-tonga/

"The announcement of Folau's return comes amid a bitter dispute with Mate Ma'a Tonga players, led by Andrew Fifita and Jason Taumalolo, who are demanding the resignations of TNRL chairman George Koloamatangi and secretary William Edwards.
The TNRL appointed former Kiwis coach Frank Endacott to take charge of the team after sacking Kristian Woolf but it is understood that he is struggling to convince players to turn out in the October 26 Test against the Lions or the Oceania Cup clash with Australia on November 2."

I can't stand the guy or his views, but I don't think there is enough for the NRL to justify blocking him (provided they give him a watertight contract that specifies he keeps certain views to himself and away from prominent social media accounts). But if he thinks acting as a scab for the Tongan team's current administration will help with a potential return to the NRL then he is as delusional as his religious affiliations would suggest.

It just removes even more teams of what I expect would be a very small list that would be willing to take a chance with him.

globaleagle said:
Gold Coast star Jai Arrow says winning a premiership will be the most important factor when deciding where he’ll play beyond next NRL season.

However Arrow believes the Titans aren’t too far away from contention.

The brother of NRL great Mark Gasnier has been accused of using fake signatures to take hundreds of thousands of dollars out of the Gasnier family trust. 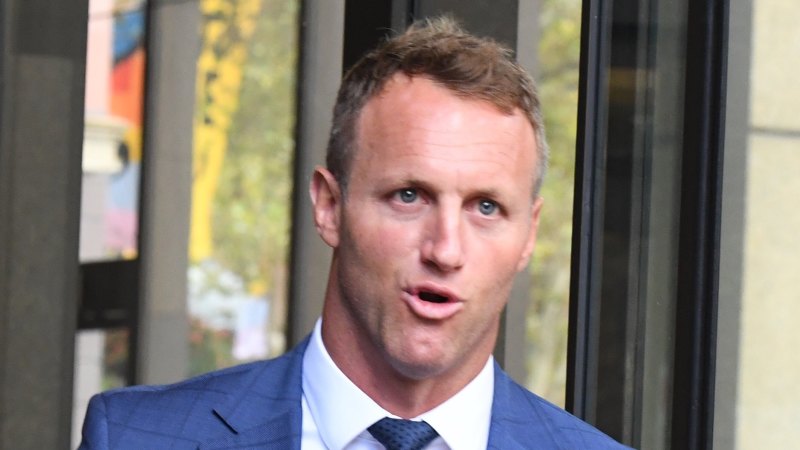 Former Dragons star Mark Gasnier has accused his brother of taking funds from a family trust as part of a long-running dispute now in the NSW Supreme Court.


Maybe because Mark was happy to sign a playing contract for only $1 some years ago, his brother thought that's all he wanted...?

I decided that the manly wikipedia page needed some editing in the 2018 and 2019 sections today.

It seemed a bit too obvious that a non Manly fan was writing about our 'terrible' cap breaches in 2018.

So it now reads:

2018 Season
After the first two rounds, Manly were found guilty of minor breaches of the salary cap over the previous five years, due to a subtle change in one particular rule interpretation instigated by the NRL's CEO.

A $750,000 fine (250k suspended) and a $330,000 reduction in the salary cap for 2018 and 2019 seasons was imposed by the NRL.[7]
Manly had not paid any player over what they declared to the NRL but the definition of the phrase 'best efforts' to find third party payments was curiously changed to now mean an 'iron clad guarantee'by the NRL's CEO.
Investigation of close to one million pieces of information and searches of all relevant electrical devices showed all payments to players were correctly and accurately reported to the NRL.

The NRL's own salary auditors signed off as "true and compliant" all payments made to Manly players.

At the end of the 2018 season, Manly finished in 15th place on the table after a horror year on and off the field, one spot better than wooden spooners, Parramatta.

Throughout the season, there were rumours that surfaced highlighting major divisions and unrest with Barrett as coach. In October 2018 it was announced that Des Hasler had resigned with the Sea eagles as head coach in the hope that he could help rebuild the club.[8][9]

Manly would go on to reach the second week of the finals series but were defeated by South Sydney, and the refs, 34-26 in the elimination final at ANZ Stadium.

So I wonder who the sharks got rid of to make way for ramien or are they just signing and hoping that no one notices it . If I recall ,they had to make space for him

as posted in another thread...

GWS Giants have signed Cooper Cronk in the hope he can sprinkle his premiership star dust on a young team with history at their fingertips.

Cronk has been recruited as a leadership consultant to help inspire a Giants outfit determined to shake off the agony of grand final heartache and take the next step to the AFL summit in 2020.

Anyone worked out how a few teams that were in salary cap hell for 'years to come' are signing players?

It all boils down to lack of transparency.

globaleagle said:
Anyone worked out how a few teams that were in salary cap hell for 'years to come' are signing players?

One of Greenberg "s edicts on his version of consistency . All teams will be treated equally but some teams will be treated more equally then others . Also wish that there could be an audit into the complete [ or no doubt mainly wasted ] costs and resources dispensed on the so called Manly " salary breach " investigation .

Wow there is a lot of talent still on the open market this year. Some very very handy cheap buys out there. Which isn't always so obviously the case.

Hi fellow Sea eagle tragics ive just heard the young Kaufusi brother is looking at exploring other options .He is currently with the Dragons all i can say is it worth the enquiry. They are from Bundaberg like me and are all top guys great family and great clubmen ,right coaching and good support another origin player potentially in making ,plus would love Felise to come with him in time
Show hidden low quality content
You must log in or register to reply here.
Share:
Facebook Twitter Reddit Pinterest Tumblr WhatsApp Email Link