Brisbane Tragic said:
agreed totally and Burton has to prove his worth yet away from all the quality at the Panthers
Click to expand...

The same situation for some players who thrived in the Storm system only to struggle after joining another team.

pt73 said:
The same situation for some players who thrived in the Storm system only to struggle after joining another team.
Click to expand...

I think Burton has done enough to show he is a quality centre ... how he goes at his preference of 5/8th is going to be his test ...
B

pt73 said:
The same situation for some players who thrived in the Storm system only to struggle after joining another team.
Click to expand...

yep - just not sure he is as good as advertised yet. Same as Suali, Dearden and Walker. None have convinced me of being long term champions.
Q

pt73 said:
They'll have to sack or move on half the current squad to not be over the cap.
Click to expand...

Who they sack can be determined by the barmaid, just put the whole team's name's in a hat.

Woodsie said:
I think Burton has done enough to show he is a quality centre ... how he goes at his preference of 5/8th is going to be his test ...
Click to expand...

He's been good when Cleary and Luai were playing but not so much lately.

As you said it'll all be different in 2022 when he's expected to be the playmaker.

Pangai gone to Penrith for rest of season.

Broncos will pay half his salary in this deal. 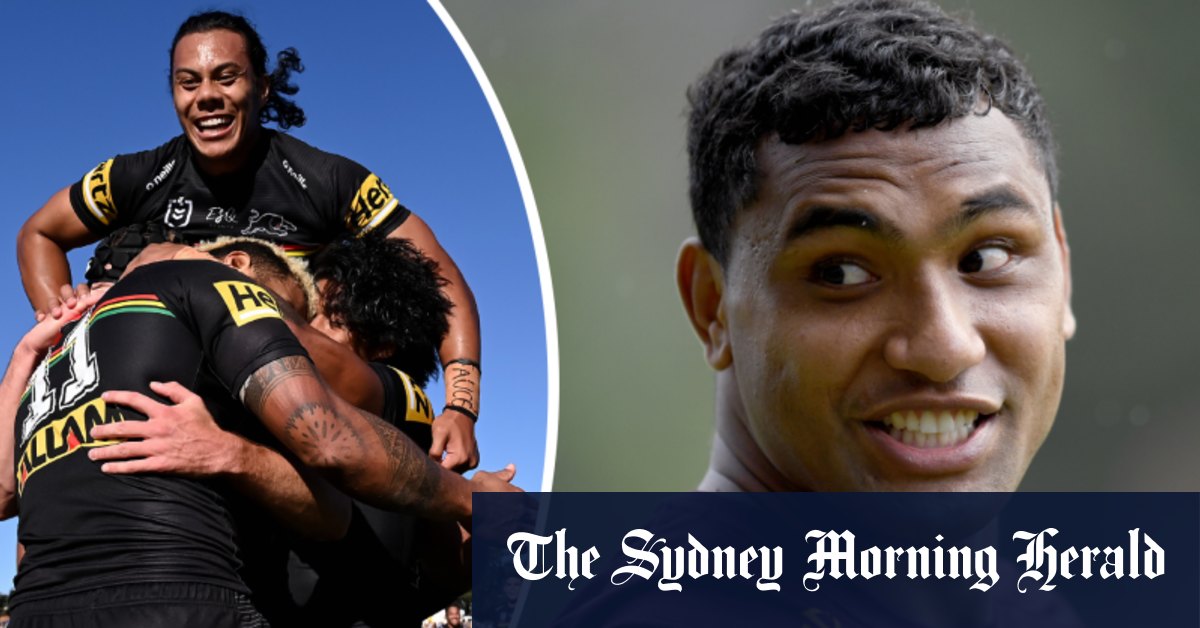 Penrith had planned on forward-paying their biggest stars, however officials on Wednesday morning altered their budget to chase Tevita Pangai jnr instead.

If this is behind the paywall, I can post the text.

The Penrith Panthers have pulled off a stunning mid-season coup, this morning reshuffling the decks to make the necessary salary cap space to sign Tevita Pangai jnr for the remainder of the year.

In what is a huge boost to the club’s premiership hopes, Penrith chief executive Brian Fletcher told the Herald on Wednesday morning that the club now had the space in the salary cap to sign the Brisbane forward.

The club had originally budgeted on forward-paying the 2022 contracts of their highest paid players before the August cut-off, however officials have overnight altered their budget plans to sign Pangai instead.

The Broncos are prepared to offset the remainder of his wage for the 2021 season paying almost half of his salary for the last three months. The deal will be finalised in the next 24 hours after the Panthers contacted Pangai’s manager Matt Desira on Wednesday morning. He has since reached out to Brisbane to strike a deal.

It was only a couple of weeks ago, and confirmed by the club on Tuesday, that Penrith had decided against pursuing the Canterbury-bound forward in a cameo role for 2021.
However, prop James Fisher-Harris will now return home for the birth of his child after this weekend’s game, opening the door for the discussions to recommence.

Fisher-Harris will not be allowed back into the NRL bubble before serving a 14-day quarantine period on his own inside a Queensland hotel, and as a result could miss rounds 20 to 22.
The Panthers had originally hoped they would be granted an exemption to bring him straight back into the bubble but that has been denied.

Fisher-Harris’ predicament has led to Penrith’s sudden change of heart and the club is now waiting to see how much the Brisbane Broncos are willing to chip in for the remainder of the year.

Sources with knowledge of discussions with the NRL salary cap auditor told the Herald that Pangai jnr has been valued at $120,000 for the remainder of the year.

Pangai was willing to take a pay cut for a chance to help the Penrith Panthers win a premiership, however the NRL will not allow a player to sign under market value.
What he is valued at in the salary cap and what he is still owed are two different things, with the Broncos and Panthers still to work out who will pay what portion of the $180,000 he is still owed in 2021.

Pangai jnr this week agreed to join the Bulldogs on a three-year $2.2m deal, turning down a similar offer from the Wests Tigers to join coach Trent Barrett at Canterbury.
R

Well good luck to the panthers, I think they have pulled off a very astute move.

NRL value him at $120k for the rest of the season, his contract at Brisbane pays him $180k.

Poor old Penrith; struggling for wins.
I look forward to reading Souffs have miraculously found space for Inglis to return for the finals.
And Money-Bill surely has another few matches left in his tank to help Easts in their hour of need.
R

Hmmm, while I lauded the panthers for their astuteness, I’ve had a moment to think about it and while nothings changed about the panthers astuteness, i find the whole thing a blight on the game, they go from strength to strength on the back of smart $‘s, apparently it was made possible in the bean counters department by shifting forward cap allocation into future years, it’s hardly sport anymore, just business based on sport and I can’t see how the fans excluding maybe Penrith find what’s happening in the spirit of the game. I guess thinking about 2013 pisses me off a little too as this has the same bad smell.

The Panthers are already busting with talent they can’t keep under cap constraint, yet manage to sneak one of the games most damaging SR on his day into their side to boost their shot at glory, messing with an already full house.

TPJ may not get a better chance at a winning a premiership going forward, he has it in him to play, no doubt and I believe he will grab this opportunity and produce for them over the remainder of the year, what a luxury having him come on from the bench for a 10-20 minute demolition job either side of half time, being part of that side and the way they play rolling the ball down field, it will be big for him and his game.
Cant imagine Sorensen or Leniu are all that thrill about it, especially if he plays big in JFH’s absence like I suspect he will.

Oh well, can’t say I’m surprised, but can say, it stinks. I also think they may not enjoy great crowd support during the finals and may even find it a little hostile at times especially if the finals are played in Qld.

Woodsie said:
I think Burton has done enough to show he is a quality centre ... how he goes at his preference of 5/8th is going to be his test ...
Click to expand...

Unless Burton has an organising half as in Adam Reynolds....may not work out so well....Burton is a running player, has a big boot, but not 1 to control tempo and game management....time will tell

KNUCKLES said:
Klemmer on the radar as well. I'd say it will be one of the two
Click to expand...

I'd take Klemmer at Manly. Still only 27 and as evident when we played the Knights - still effective.

Captain Moondog said:
Have to be near the limit of their salary cap.
Click to expand...

The most interesting thing about this Dogs cap is the fact that you MUST have 30 contracted players (or at least 29 before August 1).

So, OK, one could argue that they can fit the likes of Pangai and Vaughan under their cap having tallied up the estimated cost of their most recent signings, but one must consider that they still need room in the cap to sign 10+ other players to meet the requirements of a 30 man squad...it's all well and good to go out and sign an assortment of stars but you can't stop there...you still have to fill the rest of the squad and they aren't all going to accept a minimum contract.

Even a guy like Adam Elliot was chased hard by the Warriors and Dragons and was recently re-signed. He is not a 200k a year footballer. More like 400-500k.

That's why I question how they are managing all these signings...

NRL value him at $120k for the rest of the season, his contract at Brisbane pays him $180k.

Not quite mate. He is apparently owed $180k up until november 1, not just until the end of the regular playing season....but maybe he gets an early mark by going to the Riff and will only play 9 or 10 games for the $180k and then be free.

Rafferty said:
Well good luck to the panthers, I think they have pulled off a very astute move.
Click to expand...

Good for us too.

It will be an absolute pleasure to see his head bowed along with the rest of the Panthers when we beat their arses in the finals.

Something about a top 2 team adding a star player in August seems, well not like it used to be.
Anyone got Cam Smith's phone number, could be handy if Croker gets hurt?
C

Snake said:
I'd take Klemmer at Manly. Still only 27 and as evident when we played the Knights - still effective.
Click to expand...

Klemmer's on my list of players I never want to see in Manly colours. However, I've learned to write these lists on toilet paper after cheering for Willy Mason. Still hate Mason but I'd cheer for Joseph Stalin in maroon and white.

Bring Klemmer in. Big, skilful prop who would tear teams apart coming off the bench.

Snake said:
I'd take Klemmer at Manly. Still only 27 and as evident when we played the Knights - still effective.
Click to expand...