Premium Member
Tomorrow (Monday) Manese’s trial starts in Parramatta Court at 10am. Hoping @DSM5 can make a comeback as our court reporter.

The Wheel said:
Tomorrow (Monday) Manese’s trial starts in Parramatta Court at 10am. Hoping @DSM5 can make a comeback as our court reporter.
Click to expand...

I wondered that too, although it's not quite so easy to get into a courtroom in this Covid world. Would be a shame if we are limited to the usual inaccurate and sensationalist reporting of the mainstream media.

It's going to be a blockbuster.

Sorry Wheel, I'm off to Greece on Saturday week. no time till then. maybe another court reporter can do the job.
E

Once Manase is found not guilty, should see a bit of movement and statements regarding player retention.

Eagle 1 said:
Once Manase is found not guilty, should see a bit of movement and statements regarding player retention.
Click to expand...

how do you mean

I couldn't find a listing for Manase's trial at the link below. Maybe someone knows another way to search?

Bomb Voyage said:
how do you mean
Click to expand...

Think the clubs been hanging off on deals or no deals for Marty and Boyle pending the outcome on Manase's trial.

40 nil said:
I couldn't find a listing for Manase's trial at the link below. Maybe someone knows another way to search?

I imagine the Parramatta court list would be fairly lenghty Will the judge at Parramatta court be using a gavel or wooden spoon to make their decision?

Surely Boyle won't be resigned. Apart from being selected infrequently in first grade, he has been out injured for lengthy periods - don't think he has played this year. Better to focus on the young front row prospects coming through.
Last edited: Jul 24, 2022

One of the NRL’s brightest prospects will walk into a two-year contract if they are acquitted of charges related to an alleged stabbing at a Mormon church.

Manase Fainu’s three-year exile from the NRL could be over next month with the Manly hooker finally getting his day in court on Monday.

Fainu will front Parramatta’s district court to fight charges, in a three-week trial, relating to an alleged stabbing at a Mormon church in Sydney’s west in 2019.

The Sea Eagles have shown faith in Fainu, considered one of the NRL’s brightest prospects, offering him a train and trial deal while the matter has been before the court.

It’s believed the club has also tabled a two-year deal to resume his NRL career if Fainu, who has pleaded not guilty, is acquitted of charges related to the alleged incident.

If acquitted, the NRL, after reviewing the facts of the case, would not object to Manly registering the two-year deal.

Since last playing, Fainu has had a number of shoulder surgeries, including a cleanout this year. Manase Fainu has played in the NRL for three-years. Picture: AAP/Brendon Thorne
The 23-year-old has been banned under the NRL’s no-fault stand down policy since October 2019 when he was taken into custody after being charged with wounding a person with intent to cause grievous bodily harm. He was later released on bail.
Fainu has maintained innocence over the last three years.

The Covid-19 pandemic has forced a number of delays in the trial, meaning Fainu has now spent more time banned under the policy than any other player.
St George Illawarra’s Jack de Belin was banned by the NRL in February 2019 but had a four-year deal registered in May 2021 after he was cleared on one charge of sexual assault. Two juries unable to reach a verdict on the other charges.
The stand-down policy was introduced by the ARL Commission on the eve of the 2019 season after de Belin was charged. 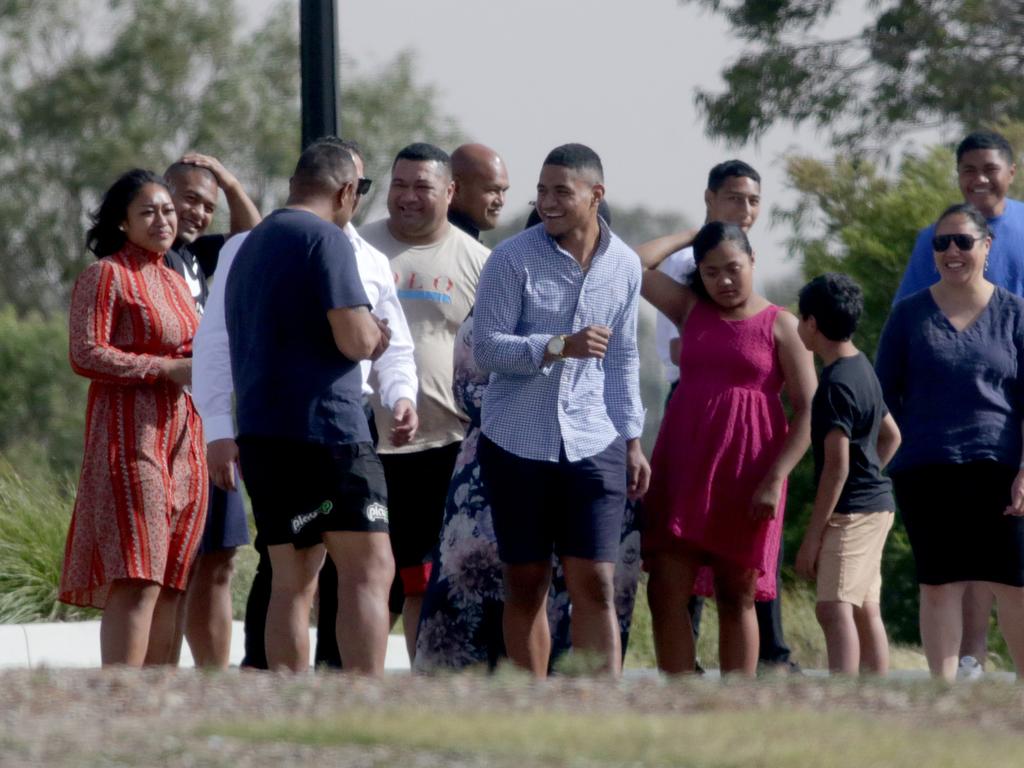 NRL player Manase Fainu greets family and friends after getting bail from Parklea Correctional Centre in 2019.
Both de Belin and the Rugby League Players Association unsuccessfully challenged the policy.
NRL Andrew Abdo told The Daily Telegraph the governing body is committed to the no-fault stand down policy to protect the image of the sport.
“It’s been really effective for us. The Commission took a stand, we had to defend that, we defended it and now we see it as something that is rarely used, which is always the intention,” Abdo said.
It’s there as a safeguard and hopefully we don’t see it used again in the future.
“But it’s there to ensure the game is protected and it’s for the benefit of all stakeholders. The commission made a brave call and there is no intention to alter that going forward.”

The Tackle: Hit highlights NRL’s shocking inconsistencySaint, Sinner, Shoosh: Knights create their own To’o
Fainu’s trial was originally slated for July 2021 but a jury trial was not possible at the time due to Covid-19 lockdown rules in Sydney.
High profile barrister Margaret Cunneen will represent Fainu.
T

Eagle 1 said:
Think the clubs been hanging off on deals or no deals for Marty and Boyle pending the outcome on Manase's trial.
Click to expand...

Laughable if this is the case.

The Who said:
I'm happy Ben Cummins isn't presiding at this battle in Parramatta.
Click to expand...

Probably the star witness for the prosecution