Well he spoke to the Daily Tele, who likely add their own spin like the rest of the BS media....
Anyways just a few things I got from the article (which as a dinosaur of technology - cant put up here)

This site won’t let me paste it for some reason.

Des Hasler’s Sea Eagles missed the finals in 2020 – and it stung.

In a season like no other, it was extra disappointing for the club as they battled through injury and form slumps to limp into 13th with just seven wins on the board.

Hasler offered his time for our Coaching Clipboard series to speak about Tom Trbojevic’s injury, what Jason Saab will bring to the club, and bristled at questions about a new recruit.

Watch every single game of the NFL Post-Season including Super Bowl LV LIVE with ESPN on Kayo. New to Kayo? Get your 14-day free trial & start streaming instantly > The COVID impacted season was a tough one for the Sea Eagles and coach Des Hasler. Picture: AAP
Dean Ritchie: How is Tommy Turbo’s hamstring injury progressing?

Des Hasler: We have covered the country – far and wide – (for medical assistance) which was difficult during COVID. He has worked really hard with (club doctor) Nathan Gibbs and the HP (High Performance) unit. We’re confident where he’s at and how he is progressing. You’re never going to solve soft tissue injuries but we need to manage it everywhere, and that’s managing it more so from a players’ point of view and a HP point of view. The education has been vast on that.

The stats are emphatic, Des. When he doesn’t play, Manly struggles.

Last year we had a back-up player, Brendon Elliot, but then we lost the back-up player to injury. It’s something you have to constantly manage. We have made sure we have covered depth in a lot of areas. We will be without Tom for at least three games through Origin. You’d think he would be a walk-up start. We need contingency plans, which we have.

Will Turbo start next season?

Stream the world's best shows on BINGE Get Binge Basic now for just $10 a month
He will. Kieran Foran is back in Sea Eagles colours. Picture: Manly Warringah Sea Eagles
How has new recruit Kieran Foran settled back in?

He has settled in well and is really comfortable at the club. He is happy with the surroundings but this is a different Kieran Foran. That’s all I’m going to say.

Des, what does that mean?

I’m not going to elaborate anymore.

Can you at least tell you where you might play Foran?

No, I’m going into that, Dean. All I will say is that he’s a versatile player who can cover a number of positions but let’s not go into that.

Who would be favourite to start at five-eighth – Foran or Dylan Walker?

I haven’t decided. And you’ve left out Josh Schuster. He is an outstanding talent. He will grow and grow. And he has some mentors here in Foran and Daly Cherry-Evans. He will lean on them.

What will new buy Jason Saab bring to the club? Jason Saab has joined the club from the Dragons. Picture: Brett Hemmings/Getty Images
He is very promising athletically and a promising winger, which is an area where we probably needed to build some depth. He is a player that I think can play a number of positions, not just wing, which is his main focus, but further down the track, I wouldn’t be surprised if he spans his horizons and playing fullback isn’t beyond him. But primarily we have bought him to play wing.

In the forwards, you’ve lost Joel Thompson and Addin Fonua-Blake. They’ll be difficult to replace.

Both players have so many positive characteristics along with Joel’s experience. We have recruited Andrew Davey (from Parramatta), plus the current experience of Curtis Sironen and Jack Gosiewski. We then have young players like Haumole Olakau’atu and Ben Trbojevic. We’ve got a good coverage of experience and youth.

Do you expect Ben Trbojevic to debut this coming year?

Paseka and Keppie really grew during last season. They really stepped up because of all of our injuries. 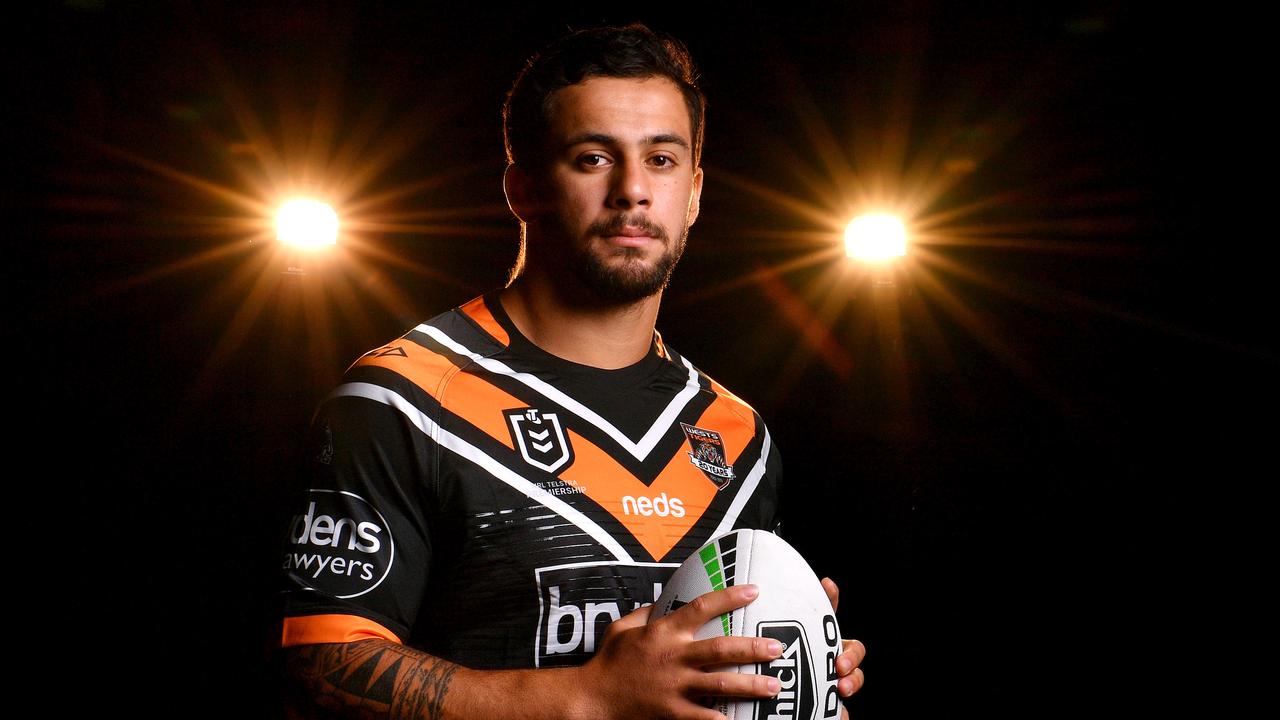 Josh Aloiai has made the move from the Tigers. Picture: Grant Trouville
You endured an horrendous injury toll last season and that, in part, was a reason why you missed the finals.

Missing the finals, it doesn’t sit easy. We were in the hunt until around Rounds 17 or 18 but we just didn’t consolidate. We let games go. It’s quite easy to blame injuries and by the end of the season we had 13 NRL players on the sidelines. But you’ve got to be able to cover such areas. Other sides had injuries and made the finals. The difference was the injuries were either season-ending or long-term, like Turbo and Dylan Walker, who were out for 15, 16 weeks. Moses Suli had a season-ending injury but we should be able to facilitate that.

While we’ve lost Thompson and Fonua-Blake, we have been able to pick up Aloiai. I’m not going to elaborate.

That’s been overdone. All good? Done.

You wonder why he talks to the media at all. Guess it's compulsory, but they can't make him say anything.

Standard stuff this time of year..
I think the starting side will be as follows.

Not sure what Des will do with Schuster. Love him to be in the team but where.... jake to prop and Schuster to lock would be interesting. In Des we trust
H

shows you what incompetents these RL "journailsts " are why would n't he put Shuschter in the question re 5/8 but include Walker ?
Just idiots ,no wonder Des struggles to stomach them

Rosko said:
You wonder why he talks to the media at all. Guess it's compulsory, but they can't make him say anything.
Click to expand...

He's a weirdo why doesn't he just speak properly. I want to know, we want to know. He is robbing us of the information we want because he thinks we are under some radar lol Wiley ol des

Des wants the team/players to be kept away from media - rightly or wrongly that’s his modus operating model (under the radar).

I agree, hiding stuff in early January. We definitely didn't go under the radar last season. Nice for fans to know some positive stuff he is seeing. Wish he would do that. Even guys like Guac and Weekes, get fans excited. Talk abit about Christian the new winger and how he is settling in, what he can bring.

Aloiai has been overdone? is he a T-bone steak?

Bring back the.... Biff? said:
He's a weirdo why doesn't he just speak properly. I want to know, we want to know. He is robbing us of the information we want because he thinks we are under some radar lol Wiley ol des
Click to expand...

Not sure if you seen the movie "Dick Tracey", but there's a character by the name of "Mumbles"...I think Des could well play the part
M

That’s been overdone. All good? Done.

What does that mean ?.... I didn’t read any mention of Aloiai in the article?

maxta said:
Not sure if you seen the movie "Dick Tracey", but there's a character by the name of "Mumbles"...I think Des could well play the part
Click to expand...

I have but i dont remember it well.. just some guy with a tommy guy a fedora and yellow coat. Cant even recall the actor. Sounds like he'd nail the role though. I cant stand hasler interviews like this. When he's open and honest its much better. You can tell by all the ahhs and umms he's trying to hide the truth. Sad really, fans aren't fools we know things before the club even announces it. Ie Foran ie Saab ie aloai to name a few. No one is under this non exist radar anymore
M

Bring back the.... Biff? said:
Standard stuff this time of year..
I think the starting side will be as follows.

Not sure what Des will do with Schuster. Love him to be in the team but where.... jake to prop and Schuster to lock would be interesting. In Des we trust
Click to expand...

Bring back the.... Biff? said:
He's a weirdo why doesn't he just speak properly. I want to know, we want to know. He is robbing us of the information we want because he thinks we are under some radar lol Wiley ol des
Click to expand...

Given his coaching performances over the last few years not sure he is entitled to be so damn ambivalent. Maybe he just doesn't know the answers anymore.

Would it be possible to see Foz in the centres or is it too late/ game to evolved for that now?
D

Indeed.. he will be 12. Hoping either jack or Olakau'atu get the other spot over davey... surely they do. Id love to see Olakau'atu play in the starting side. He proved he's ready

Probably what I got from that is;

1/ Ben T is considered a forward not a centre
2/ Des didn’t want any talk around the hooker role - hence didn’t wish to discuss Foran. He may have others plans in that area outside of what we know already
W