Has agreed to terms with the Knights (haven't they signed a few over the last 2 seasons!!) - but the nrl aren't registering any contracts while they are busy hiding their buckets of money and crying poor to the players and fans. 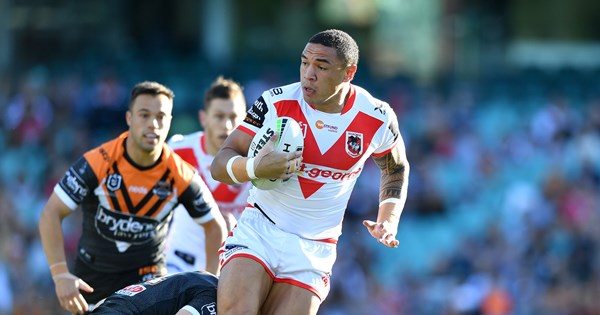 The Red V will enter the marketplace to replace representative forward.

Was mentioned in the contracts thread, but we're all bored so maybe here's another thread for Bozo to tell us to become members.

Also, nice addition by the Knights, surely they gotta start climbing the ladder "for realz"

Didn't take Newcastle long to recover from a Tinkler basket case to overspending for players.
I know they are owned by a Leagues Club but now there is no pokies money how are they enticing top-liners there?

The Who said:
Didn't take Newcastle long to recover from a Tinkler basket case to overspending for players.
I know they are owned by a Leagues Club but now there is no pokies money how are they enticing top-liners there?
Click to expand...

The outlook that gambling conquers all?

Interesting part with frizell contract it's good coin for a forward. With Knights owner having to close clubs and gyms and talk NRL have proposed players take and 80 per cent reductions.

Will be interesting to see if he still wants to move there when the coin becomes much much less.

How can the Knights think of doing this? What a farce to announce this now

The 2.1 million Frizell has agreed to under current salary cap terms would need to be re-negotiated if the NRL survives. I would assume the salary cap will be coming down now for each club meaning this deal could probably not happen..

With talk of salary cap reducing and some contracts to be re-negotiated,I’m sensing another James Hooper Bulldogs story about how they’re going to target some big names again

You cant blame Frizzell, its within the rules, If I was a Dragons fan I would be pretty upset as you are now expected to cheer a player whose heart is somewhere else. I remember 2015 and the agony of watching Foran go through the motions and not care after he defected to the whinging worms.

I really wish the league would do something about player transfers. This signing players a year out is really ridiculous. There needs to be a transfer window from the day after the grand final till the end of January for player transfers as its really difficult when you see a players loyalty brought by coin or not believing in the club hes in. Its clear that Frizzell believes that Drugcastle have a better chance than the Dragqueens of winning something and its a double whammy for the Draggies as they have no De Bellin as well due to his circumstances.
Show hidden low quality content
You must log in or register to reply here.
Share:
Facebook Twitter Reddit Pinterest Tumblr WhatsApp Email Link