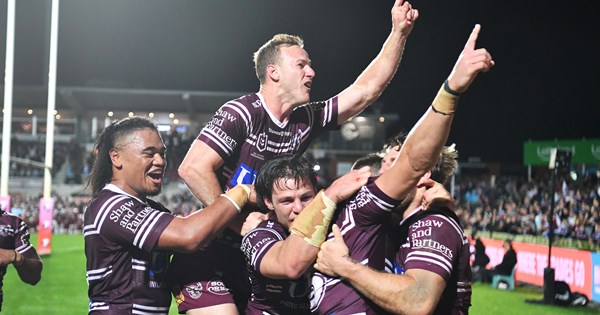 The NRL has announced a range of rule changes for the 2020 season relating to scrums, trainers and tackling players off the ground while also introducing a 20/40 kick.

The NRL says it has listened to responses from fans when initiating such minor changes as allowing scrums to be taken from infield, rather than the 10-metre line . .
I mean, really. How many of us told the NRL that such a rule was even a consideration?
Yet, if most fans were like me, they would have told the NRL that the important issues were:
1. Returning to one referee, and
2. Minimising the use of video ref, including no slow-mo replays

Yet, neither of these vitally important rule changes have been made.
Talk about re-arranging chairs on the Titanic. 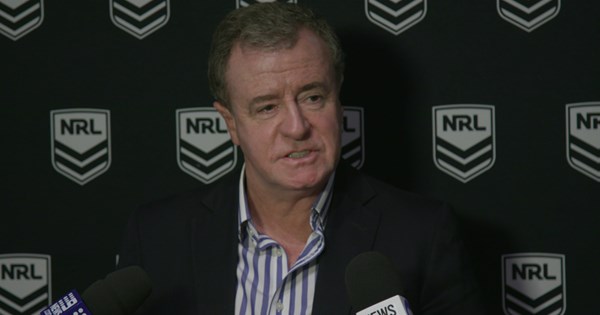 1)The Commission also endorsed the introduction of a general-play "challenge" system and NRL management will work through all the operational details with a final report to be provided to the commission in February.

- Happy with one Captains challenge, but it's still weird that the nrl haven't perfected the system where there is a bunker 'out there' that can see howlers but wont rule on them.

A team in possession will earn another set via a tap-kick if they kick the ball from within their own 20-metre zone and find touch within the opposing team's 40-metre line.

-No problems here. Introduces another element to the game but wingers may be going crazy trying to work out where to stand. Could lead to more breaks down the edges as the wingers drift back earlier? I dunno, answers on a post card.

3) Change to the scrum rule, the team feeding the ball will have the option of setting the scrum at three locations – 10 metres or 20 metres from the sideline or in the centre of the field, in alignment with the black dot on the crossbar.
Teams will be given five seconds to inform the referee of their choice of scrum position.

- Why? This seems totally unnecessary. And 5 seconds, yeah right. Just gives the captains more time to pontificate so everyone gets a rest. What happens if they take longer than 5 seconds? Is this 5 seconds added to the time allotted to set the scrum or a part of? Either way, what a crazy rule change. Not a fan, but again...not a super huge deal.

They said the coaches were keen for this one, so what do I know?

4) The NRL has announced a change to the "mutual infringement" rule regarding incidents when the ball strikes a trainer or the referee. Previously, the loose head and feed would be awarded to whichever team "the attacking team (i.e. with territorial advantage)".

Under the new rule, the referee will be able to replay the previous play-the-ball in the event of play being irregularly affected by circumstances out of the players' control.

-Fair enough but 'irregularly effected' just screams "another subjective interpretation that the refs can use to help the storm/roosters/souffs/brisbane" - you all know the favourites.

5) The act of tackling a player in mid-air will be banned whether the player initiating contact is the attacking player or the defending player, in line with the current international laws of the game.

- Is ok, I guess. Though when running, both feet leave the ground so like almost all tackles are 'mid air' lol.

6) The Commission agreed that further limitations should be placed on the time orange and blue shirt trainers could spend on the field.

- It's a problem for sure. The Allan Langer rule they should call it.

7) There will be no changes to the scoring system for wins in extra time, which was discussed in the lead-up to the Commission meeting.

- I think the solution is simple, but the nrl doesn't do simple.

Can’t see much wrong with any of those BUT a big FAIL on attacking some of the real issues fans have.

Oh sorry I forgot , fans are meaningless only broadcasters get a say!!

Apparently when golden point games are completed the losing team will receive one point!!!

madmax said:
Apparently when golden point games are completed the losing team will receive one point!!!
Click to expand...

There will be no changes to the scoring system for wins in extra time, which was discussed in the lead-up to the Commission meeting.

So....I'm not sure where you're reading the one point thingie..?
B

The 20/40 rule will play in our favour. With DCE the biggest exponent of the current rule I see him winning us plenty of field position with this inclusion.
Teams will have to have their wingers drop back early in our sets and might open up our expansive play

madmax said:
Apparently when golden point games are completed the losing team will receive one point!!!
Click to expand...

I like it. Loser walks away with something (a reward for being equally as good as the opposition for 80mins) and winner gets the 2 competition pts. Doubt it will happen though

The scrum being taken from 3 different points is a weird one, it just creates confusion and for no real benefit.
Interesting to see how the captain challenge will work in general play?? I can only see teams using when a try is scored against them. Hopefully that would lead to refs making the calls instead of using the video ref for everything.
I would have liked the 1 point each after 80 mins and winner in Golden point picking up the extra point but looks like that wont be happening.
The obstruction rule is the big one they need to sort out, there needs to be a grey where if a defender is not disadvantaged then it is play on!
L

After reading the article and listening to the press brief, my thoughts:

20/40: Agree, good move, it’ll allow teams to escape endless repeat sets, if they can pull off the kick and are prepared to take the risk that they just give the ball back to the opposition.

Scrum: Great idea as we could now see some real attacking options off the back of the scrum and possibly a rethink on how teams defend. Who knows, we might even see forwards contesting the scrum, backs defending against backs and some great set plays, as in days of yore. The 5 seconds, IMHO, just enough time to let your team know what you’ve doing but not really enough for exploitation for an extra rest, maybe you could though, you never know.

Interference( re the trainer or ref interfering accidentally): I think the ball should go to the team who had their kick interfered with, e.g. Raiders would of gotten the ball back in the GF. A caution that they’ll have to ensure that the ball isn’t deliberately kicked into a trainer assisting an injured player to get another tackle or to reset a botched 5th tackle option. Unfortunately, they’ve left some discretion with the ref, so I can’t see us ever get any benefit. As Global Eagle said, it’ll be used to benefit favourites.

Challenge: Agree; let’s just hope that DCE(or any subsequent Skipper) doesn’t use the challenge like Tim Payne uses the DRS in cricket.

Trainer access: Nice to see that they’ll be changing things but we’ll have to wait and see what they finalise before the first game of 2020. Laughed when Alfie was specifically referenced in a reporter’s question in the briefing; I’ve been against what he does for years and I thought I was the only one.

Golden Point: Well, I understand the commission’s thoughts but what about tradition when they changed the value of tries and field goals and scoring records over the years. IMHO, get rid of Golden Point or change the rule to Golden Try and ensure both teams get an opportunity to score.

globaleagle said:
) Change to the scrum rule, the team feeding the ball will have the option of setting the scrum at three locations – 10 metres or 20 metres from the sideline or in the centre of the field, in alignment with the black dot on the crossbar.
Teams will be given five seconds to inform the referee of their choice of scrum position.
Click to expand...

Doesn't the Attacking side have 8 seconds to set a scrum now?
So ball is knocked on near the sideline scenario
1)Chez picks it up and holds a 5 second discussion with our tired pack
2) To get their breath our pack decides on the 34 meter centre spot as it will take another 20 seconds to saunter over
3) So how long do we have to actually pack the scrum. Is it still 8 seconds?

We need a winger who can do these as Turbo's dodgy hammies can't be relied upon.

At last the NRL brings in the 5 second rule. Alas, too late for big George. The NRL has announced a range of rule changes for the 2020 season relating to scrums, trainers and tackling players off the ground while also introducing a 20/40 kick.

slamminsam246 said:
I like it. Loser walks away with something (a reward for being equally as good as the opposition for 80mins) and winner gets the 2 competition pts. Doubt it will happen though
Click to expand...

The argument against one point for the losing team after golden point is that it would mean that there would be three points allocated to these games rather than two points to all other games. I would like to see 3 points a win and two points to the winners in extra time and one point to the loser in extra point.
Re Captains Challenge, the best thing is that it will hopefully reduce the number of times refs hand out dud decisions knowing that they will be forgotten in the wash up. They will look stupid when their decisions are continually overturned. Imagine a Captains Challenge in the '13 GF. Would have led to another Premiership.

There will be no changes to the scoring system for wins in extra time, which was discussed in the lead-up to the Commission meeting.

So....I'm not sure where you're reading the one point thingie..?
Click to expand...

Read it in Sportingnews....Andrew Webster from Big Sports Breakfast program quoting V’Landys meeting / discussion. Also talks about changing to 4 quarters instead of 2 halves for each game to increase commercial revenue!!!

Not a fan of the new rule re: tackling players in the air.

Coaches will use the 5 hitups and then corner bomb more and more.
Tuopo would score 50 tries off kicks if Cronk was still playing.
Jorge may well struggle further with this change.


Re: captains challenge.
Yuck, yuck, yuck.
Video refs get it wrong too often now, without being further utilised.
Captains will end up using it more in hope, just like the cricket.
Need some further detail from the NRL though about how it will work.

Challenges were a failure in the u20s

Scrums. Are we going to have a 5 second shot clock to know where the scrum will pack running at the same time as the 30 second clock that the scrum needs to be packed in?

Attacking player tackled in the air.. Going to be penalty tries galore.

None of these changes were needed and will probably cause more drama than not.

We all also hear that the NRL is way overstaffed. Is it that every year we get changes that we don't need just to validate the existence of the rules committee?

While I understand the context, or spirit of the 'tackled player in the air' rule, like others I'm wondering about the situation when a player is running for the try line and 1 or 2 metres out just launches himself, at the line.