No one ever thought taupau would come here.. I was completely blindsided by that.

3 things ... we have always gone well with a pommie in the side .... he is better than any 2nd rower we currently have ... and I don't trust any mutt that won't honour a contract in good faith ..

He is a hard working creative second rower. As I said above it would be hard to value him above 580.

if we could afford that then we couldn’t have our combo of dce, turbos, our props etc. Or alternatively our depth would have to suffer.

we have quality 2nd rowers possibly on 400k each, and a fair bit of forward depth at the moment.

pursuing Bateman on 580 or above would wreck the balance of the team.

IMO . What dictates what we spend and who we buy is how our current players perform as
Weak links in a team sinks a team .
At the moment I believe Des has a playing group with so much potential and all of our current players are a great investment .
I have faith in all of our boys . No room for Bateman in our squad

Woodsie said:
3 things ... we have always gone well with a pommie in the side .... he is better than any 2nd rower we currently have ... and I don't trust any mutt that won't honour a contract in good faith ..
Click to expand...

Completely disagree with your second point! To me he’s overrated & not worth even $580k....he would bring zero to our attack....the 2nd rowers we have are just as good!

I'm hoping those days are over!

Bateman is ok but he comes with that manager. Barge pole stuff

Not quite sure how to post links so hopefully it works.. but have a go at this lol.. surely on the outer now
D

Hopefully he goes to the drags to replace Frizell and soaks up some of the cap that they were going to throw at Suli.
M

sean john said:
Bateman has been allowed to test the market for next year although been contracted til 2021. He is on 580k and I seeking a 800k contract. Make it happen des! If we could manage it a premiership trophy would surely be on its way to brookie
Click to expand...

I think Bateman would like great in the Sea Eagles kit .

madmax said:
Completely disagree with your second point! To me he’s overrated & not worth even $580k....he would bring zero to our attack....the 2nd rowers we have are just as good!
Click to expand...

Was helped by playing in a good team! Doesn’t mean he’s any better than what’s at our club![/QUOTE]
Last edited by a moderator: May 24, 2020

Probably is going to be hard enough to retain all of Manly "s existing good forward line up and playing group as well as the emerging promising up and comers . Schuster may well be considered as a back rower contender in any case reasonably soon so again unlikely that the club would be interested in any high profile forward recruits as things now stand .

Too much money I reckon ( for us) and besides it’ll only about getting him him more $$$ from the Faders.

Hooper standing by his comments:

“I’ve got the utmost respect for John Bateman as a player and I don’t think the Raiders make the grand final last year without him,” Hooper said on Triple M.

“But I’m also a big fan of putting the sssshhh in Twitter, ****ter because it is a sewer social media full of toxic rubbish.

“John is well within his rights to have his say on there, but I stand by the story.

“His agent Isaac Moses has been repeatedly at the Canberra Raiders agitating for a release since the grand final last season.

“He wasn’t his agent when he signed with the Canberra Raiders. As a result I don’t think John Bateman will be at the Raiders next year.”

The story before the grand final said enough. He is all about him, and to the hell with the team. Pass
W

This will end up just like the Latrell situation, he will find no club is willing to pay enough over his current deal to cover the new managers fees. Should've kept his mouth shut, stuck to his word/signature, focused on winning a second Dally M backrower of the year and let the bidding war commence for 2022.

If he leaves the Raiders, the usual pretenders with too much cash and no sense will snap him up. He'll make a great Dragon, Eel or Bulldog for a few years on squillions and then scurry back to the ESL with no trophies. Who farking cares.

According to this report, the Bulldogs are interested in signing Bateman for 2021 and the Raiders have said they won't stand in his way (if more money is offered) 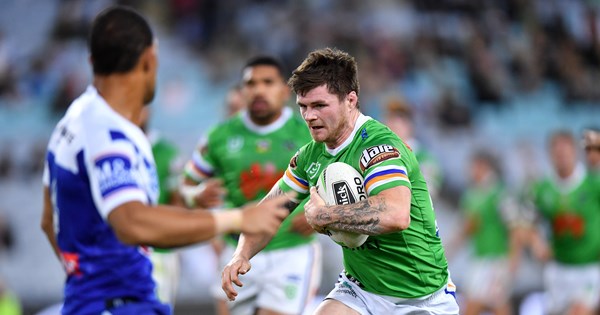 Raiders forward John Bateman is on Canterbury's radar with the Bulldogs set to approach the English international about a potential switch in 2021.