For & Against: Tom Trbojevic will be Manly's best ever fullback

I said before I reckon him and Cleary are the only current players who have potential to become immortals. If Turbo stay fit most of his career he will no doubt be our best ever fullback BUT it all counts for nothing unless he can deliver at least 1 premiership over the next few years. All other immortals have achieved this! We are right at the start of our premiership window.
B

Cherryjohn said:
Yep agree. Those who missed seeing Wombat play missed out on seeing a truly great Fullback. He was 18 years old when he played when Manly won their 1st Grand Final in 1972. In the semi Final against Easts (Roosters) he was like a bulldozer in a 32 -8 win that stamped him as a future star. He did'nt kick goals in 1972/1973 .That was Ray Branighan's job. In 1976 Wombat's goal kicking won the GF against Parra who scored 2 tries to 1 . The 1978 GF replay win was Graham Eadie's GF . He did everything in that game.Score tries .kick goals ,defuse bombs ,smash Cronulla players in last ditch tackles.As much as i admire Turbo and think he will be one of the greats of the game,you have to win Grand Finals for Manly and plenty of them to match the great Wombat.
Click to expand...

So so true. If Turbo is healthy for another 10 years the discussion might well be very different I think. But right now Wombat is number 1 in my books as well.

Brissie Kid said:
I don't think 'best-ever' is a hyphenated word. Surely it is just 'best ever'.

Was just in the wrong place

Tommy's just starting his rise at a rapid rate. Let's revisit this in 5 years or so and see how he's going then. If he continues the way he's playing now then he will be one of the greatest to ever play the game.
W

Out fullbacked Teddy last night, from centre. Best player in the comp and will win a dally m as soon as he plays a full season.

To put Trbojevic's Townsville theatrics into perspective, Telstra Tracker data shows his 7227 metres of running was just one less than fullback James Tedesco, a comparison virtually unheard of between centres and custodians.

In the same fashion, Trbojevic's 24 touches of the ball against Queensland were roughly double the usual amount of action (12-16 touches) an NRL centre typically racks up in a game.

Angry Tommy, Point To Prove Tommy or No More Mr Nice Guy Tommy, whatever you want to call him it doesn't matter. He has gone to another level this season and whatever is providing that motivation long may it continue. It's like he decided after all the hoohah with his latest hammy injury to just give the royal FU to all and sundry. He is setting standards that are crazy good, and I'm loving how he is expecting his team mates to stay with him. I'm waiting for that game that he is finally happy with his efforts, because it'll be a doozy.

Turbo has a hard enough time stringing a season of games together. No doubting his incredible ability, but being fragile as toilet paper is going to be his greatest challenge to overcome. If he continues on this trajectory and finds a way to rival the hardness of Eadie (78 anybody?) then he will walk in with a canter. It's all in the durability aspect I have questions

Tom has a LONG way to go to better Snake, let alone Wombat. Wombat was our kicker, played like 250 games and hardy missed one through injury for 8 years or so. The game was a LOT tougher back then and resilience was like gold. I recall seeing Wombat almost put opponents through the fence many times in defence. If you were not lucky enough to see a lot of Wombat then you are not really in a position to weigh Tom against him. He was dominant in a much tougher game. He was special.

If Tom plays 20 games a year for 5 years with form like he has been showing and he would outpoint Snake but fall short of Wombat in my eyes.

40 years an eagle said:
Tom has a LONG way to go to better Snake, let alone Wombat. Wombat was our kicker, played like 250 games and hardy missed one through injury for 8 years or so. The game was a LOT tougher back then and resilience was like gold. I recall seeing Wombat almost put opponents through the fence many times in defence. If you were not lucky enough to see a lot of Wombat then you are not really in a position to weigh Tom against him. He was dominant in a much tougher game. He was special.

If Tom plays 20 games a year for 5 years with form like he has been showing and he would outpoint Snake but fall short of Wombat in my eyes.
Click to expand...

@BOZO think we need some voting options if you have a chance please.

40 years an eagle said:
The game was a LOT tougher back then
Click to expand...

It was definitely a lot more violent, but for overall toughness there would definitely be arguments both ways.

The best ever thing is so artificial in my view. The game has morphed and is very different from era to era. Tommy IMO the best fullback in the game today. Teddy is just lucky Tom kills it a centre.

Wombat Eadie kept out some very good full backs at the time like Alan Mc Mahon , John Dorahy , Ted Goodwin , Greg Brentnal from the Australian full back spot during his era as well as his prolific goal kicking . Would place Turbo just ahead of the exceptional Snake at present but if Turbo can keep up his mainly sensational form of recent times and good durability , hopefully help jag a premiership or two for Manly , most certainly could go down as Manly greatest ever Full back to eventually edge out the great Wombat .

Dion Johnson said:
@BOZO think we need some voting options if you have a chance please.
Click to expand...

Tom is Brilliant
But Resilience out lasts a burst of Brilliance
The Wombat was brilliant as well as he dominated the number one position on his day
The moral of the story ....
Will Tom be the best ?
It is too early to say

Funny, but it's possible that Tommy can be the world's best fullback, or even the world's best player, while still not being Manly's best ever in his position. Wombat and Snake set a very, very high standard.

It may seem too soon to be anointing Tom Trbojevic as the NRL’s next Immortal – not called Cam Smith – but the numbers don’t lie writes Paul Kent.

Several readers sent correspondence this way asking who would be the next Immortal currently playing the game. With some embarrassment, I couldn’t find one.

Then I am watching State of Origin in Townsville on Wednesday night and the answer jumps out of the television, bright and bold.

Tom Trbojevic wrote himself a small piece of history when he became the first player in the game to score a hat-trick of tries twice in State of Origin.

It will be only a footnote to what he eventually achieves in this game.
R

Comparisons are maybe not the best way or the way I’d like to think about it.

Eddie, snake, Ridge all played in what honestly would be considered better sides.

Factoring in the game is also very different now.

Grand final success aside, state and test representation aside, injuries aside.

Who would you want playing at No 1 this weekend?

Tom for me is a stand out, I have been lucky enough to watch the careers of all 4, each had their own very distinct playing styles and all were special talents.

Wombat achieved much in the game and holds a very special place as one of if not the best FB our club has ever had. We all know the story.

Snake was gifted, his speed, his running game, it was brilliant.

But Tom for mine is so complete as a player, his physic is so on the money, his an attacking weapon, with or with out the ball, can play and cover many positions, his defensive efforts or more importantly his try saving ability is uncanny, his work rate is off the scale, his overall effect on the outcome of games, both at club and state level is crazy, he no doubt has a special aura about him. I think he is first picked in any rep side and I would dare to say he is the player most other players would want to share the field with above all others, not much else to say really, for me Tom is on his way to being one of the best players I have ever seen play the game, the journey‘s got a little way to go yet and I have no doubt it will yield plenty of success.
I‘m just glad he wares our colours, imagine how other teams and supporters feel when they know they have to play a side with Tom in it, how good and how lucky are we. 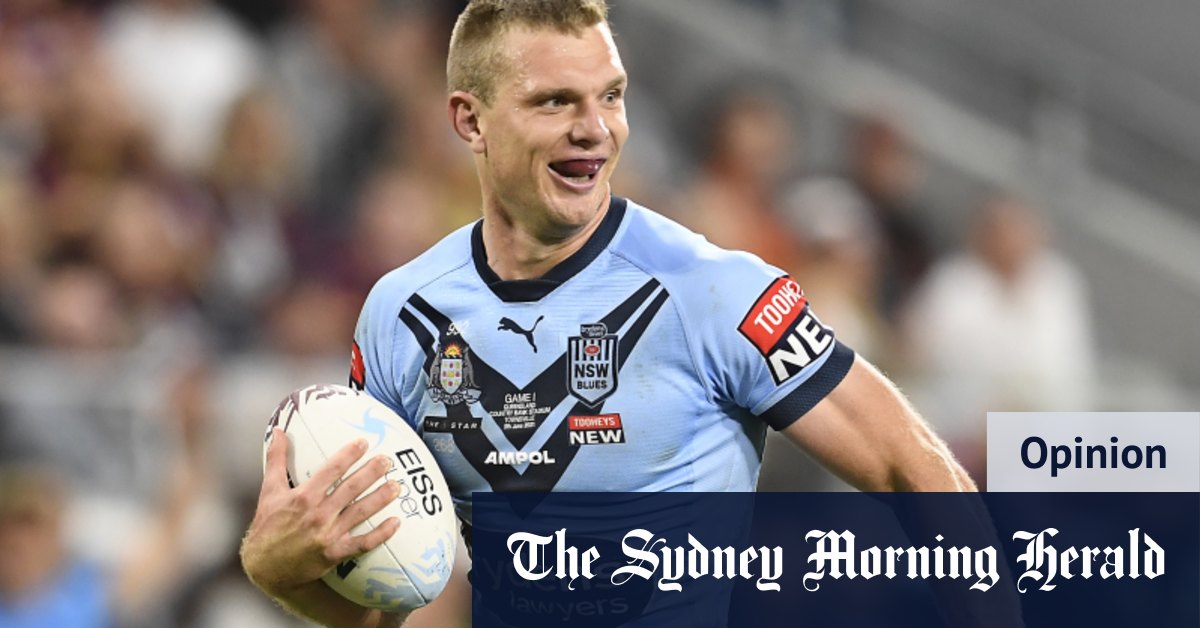 The young fullback is changing the game – for both Manly and especially the Blues.