Good to see his house has plenty of tables and chairs

Outgoing Manly Sea Eagles coach Trent Barrett has quietly listed his stunning northern beaches home for sale, no doubt hoping for a quick pre-Christmas sale as he contemplates his next move.

Barrett, took over the coaching duties of the Sea Eagles in 2016, but handed in his 12 months notice in July, citing a lack of resources at the club.

He is still on the Manly payroll but has agreed to stay away from training.

In the meantime, former coach and first grade player Des Hasler will be returning to the club as its new head coach for 2019.

Hasler comes back to Manly after a six-year-stint as head coach with the Bulldogs, which ended controversially in 2017.

He has remained a long-term northern beaches resident and owns a property in Collaroy, only a few suburbs away from Barrett’s home.

Barrett’s Freshwater home has been listed on realestate.com.au with no identification or auction date, however CoreLogic data confirms the property is in Barrett’s name and has been on the market for six days.

A price guide for the property has not been made public. The selling agent is remaining tight-lipped about all aspects of the sale or the ownership of the property.

The report shows he paid $2.41 million for the property in August 2015. It remains the fifth-highest price paid for a property in the tightly-held street.

According to the realestate.com.au listing, the property has a new Hampton’s shaker style kitchen with “stunning waterfall edge stone island bench and appliances.”

The “glamorous” main bedroom has walk-through wardrobes and a new ensuite.

Other features include a sandstone gas fire place in the main lounge area with solid timber floors throughout, a covered outdoor dining area that looks out over the gas and solar-heated swimming pool with glass edge, to the manicured lawns beyond.

The home is designed with privacy in mind, and established gardens hide an idyllic north-facing back yard.

I wonder if he is throwing in his 'trophy' cabinet as part of the sale?

Nice outdoor furniture there.
B

If he throws in that signed Jamie Lyon shirt in the background the price will go up further!

More from the listing agent.

"In August this year, Trent had a custom made display put in his kitchen to hold wooden spoons, as a homage to his coaching career. The cabinet however was left unused this year. With Trent moving on it's believed the new kitchen addition has sparked the interest of Brad Arthur."

Yeah, it looks like Barrett had it really tough on the Northern Beaches, a home most would kill for, a salary most would kill for, and a coaching job where the club ACTUALLY wanted him to continue on coaching, now that's a job most would kill for.
Who gives a $hit if we didn't have the required garden furniture, obviously Barrett did, life must be a lot better down at the Gong, even if you're out of work.

Not every one is suited to the tough resilient Manly winning culture
We have all seen the pretenders come and go
Trent has shown that he does not have the characteristics of a durable proactive head coach .
Trent proved to be one the great pretenders and I am glad that our club will never endure him ever again .
It takes special talent to add to our successful Manly culture . A person does not have to come from Manly but they have to have all the Manly characteristics
Nothing Manly about Trent as when the going got tough Trent quit .

He said that he loved his players but the fact is he quit on them . He could have stayed and take adversity head on and be an example to his players and teach them that quitting is never an option . Teach them , Sticking by each other and Winning against all odds . He would still be getting paid . Trent opted to take the easy way out . To take the easy money and run .

Nothing easy about the head coach Gig Trent . No matter how many chairs and bums you have around you .
Any one can run away Trent . One does not have to have the resilience and self belief to do that . Taking adversity head on facing problems and working through them. Thats what builds a strong character and builds a strong culture .


Every picture tells a story . No Idea . No fcking Idea

No more of his stupid looks at press conferences 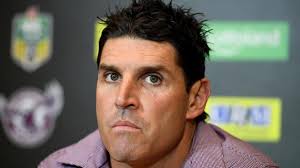 It’s gonna be a thriller and a chiller and killer when I get that gorilla in Warilla.

IF YOU DO NOT TRY YOU CAN NOT FAIL

I admire how good he thinks he is. The ego is enormous.

"I'm resigning because I don't want the lack of resources and support at Manly to damage my brand".

COMMANDER said:
I admire how good he thinks he is. The ego is enormous.

"I'm resigning because I don't want the lack of resources and support at Manly to damage my brand".

MANLY4LIFE said:
How dare u compare that nuffie to the brilliant coco and pops lol
Click to expand...