mickqld said:
Lisfrac surgery with recovery time 3-5months but a 20% loss in function in the foot for 12 months
Click to expand...

Send him to the gulag! We have harper and walker

HoldenV8 said:
Right now all I can say is thank God for Lachlan Lewis having a fit of the fumbles
Click to expand...

Lucky foran wasn't there to spank us.. the game could of been very different

Waz13 said:
Cust has energy but imo he’s not a starting nrl half. Keep him in the 28 as a backup and he will help fill in. Haha burns 2.0 not bad.
Yep Hoppa showed a bit more tonight.
Although u need to play what’s in front of you, that dogs team is not nrl standard so we shouldn’t get too excited. I think the titans will be a better test.
Click to expand...

This is why we need foran. Cust should goto 9. Travis burns 2.0 haha

HoldenV8 said:
Don't be so sure Garrick is gone. Apparently his injury is such that he's due back either next week or the final round. And I really can't see us swapping him for Saab either. He's contracted until the end of 2021 and I believe he'll be one of us until at least then.
Click to expand...

Isn't the deal done? Isn't Garrick out for the season?

Blake A said:
True... but the dogs have been appalling for many years now.
Click to expand...

Benchmark Perspective......
Every one looks extraordinary against ordinary opposition running last in the comp

BOZO said:
Benchmark Perspective......
Every one looks extraordinary against ordinary opposition running last in the comp
Click to expand...

Nordburg said:
Shows you the depths the team has sunk to this season when many on here have elevated some players to immortal status based on games against the Tigers and Dogs
Click to expand...

Bring back the.... Biff? said:
Isn't the deal done? Isn't Garrick out for the season?
Click to expand...

I can't say on the deal, but in last nights post match presser Des did allude to the fact that Garrick could be available to play next week. 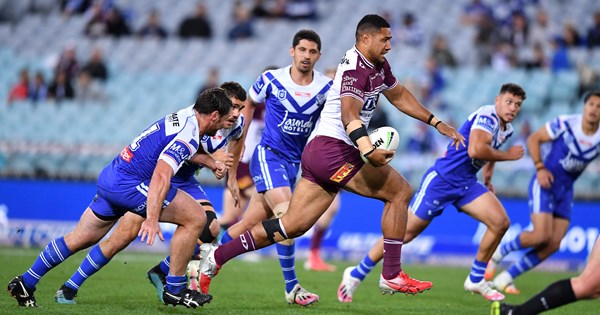 Winners Pics are the Happiest Pics
Thank you @The Wheel

mickqld said:
So without last week's capitulation and the Parra and Knights games refereeing robbery we'd be in 8th.
Click to expand...

Yep I reckon we will miss the 8 due to f/a and Tgat will complete the most frustrating season on record.
M

On yesterday's effort, we are not beating either the Titans or the Warriors.

mave said:
On yesterday's effort, we are not beating either the Titans or the Warriors.
Click to expand...

My reason to agree with you there is because the Titans and Warriors players perform more consistently through out the game where us and the dogs perform in patches here and there .
The reason we beat the dogs last night was because they were a patch below us .

This photo of Jake & DCE Reminds me of this:

Reminds me of this:

This was a typical end of season game between two teams that are not close to finals this year.

The Bulldogs started well and were motivated as this was pretty much their last chance to avoid the spoon. Their first try from ours standards was pretty soft as our passive defence opened up. The first half an hour was poor, bad kicks, not a lot of intensity defending and be only 10-0 down was more about good luck than management and the Dogs do not have the threat with the ball.

The one thing that did emerge in that horror start was that our right side attack was holding its own and a couple of times had busted the dogs out there and it was the catalyst for Manly to get going as we got a good try to open our account.

We need had to endure the weekly crap we get from the officials with repeat after repeat sets, penalties. Gosh they frustrate me! Once the team endured that and showed some character they scored back to back fantastic tries and played at a speed that the dogs could not live with.

The second half was pretty good and another couple of fine tries got Manly just out of reach of the Dogs and as usual we allow the opposition to score tries from kicks, something that we continually do not deal with and it kept the scoreline honest.

Many positives to come out of the game with some of the younger playes making their mark. Morgan Harper was again a stand out at right centre, I thought Funa did well at Full back and young Hoppa with a few games under his belt looked a lot better.

We looked again disjointed in the first 30 minutes with DCE doing a lot of dummy half work. Give DCE huge credit that after that he was responsible for setting up some fantastic tries and that was great to see him do that as he has fantastic creative skills when he is allowed to show them.

In the wash up, younger players are gaining experience and for them to finally get a win even though it was only against the likely wooden spooners will add to their confidence. I am glad that got that win as they were mighty close the week before and lets hope we see more improvement over the next two weeks with very winnable games to finish the season off!
Show hidden low quality content
You must log in or register to reply here.
Share:
Facebook Twitter Reddit Pinterest Tumblr WhatsApp Email Link