Premium Member
Can someone crack the pay wall?

Staff member
Do we need to read the article to know what it is going to say?

A full and desperately needed redevelopment of dilapidated Brookvale Oval is now ‘imminent’ — ending a 30-year wait for frustrated fans.

A full and desperately needed redevelopment of dilapidated Brookvale Oval is now “imminent” — ending a 30-year wait for frustrated fans.

The much-anticipated news comes just days before Manly finally return home to 4 Pines Park.
News Corp has been told by well-placed sources that the State Government could announce Brookvale’s total reconfiguration within weeks, if not days.


It is understood the upgrade will be substantial with the Government having completed a detailed business case on the project, including a range of confidential artists impressions. Only high-ranking NRL officials have viewed the plans. 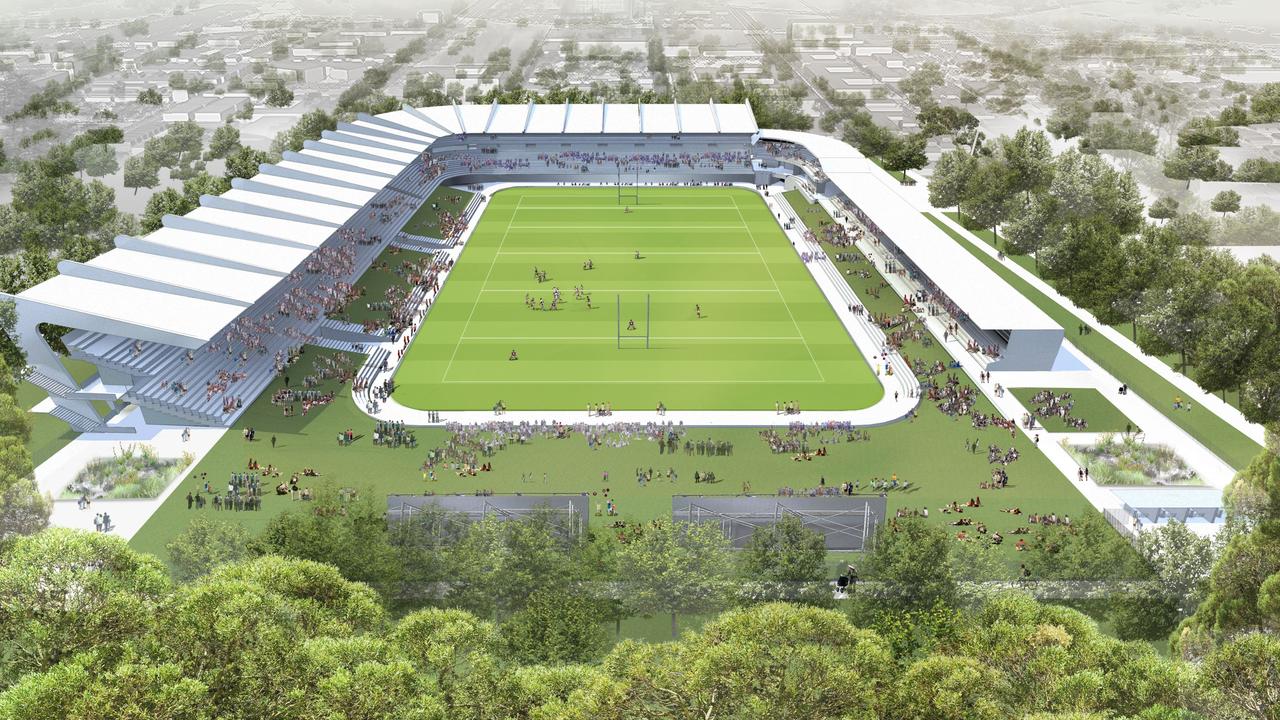 One of six redevelopment plans for Brookvale Oval. 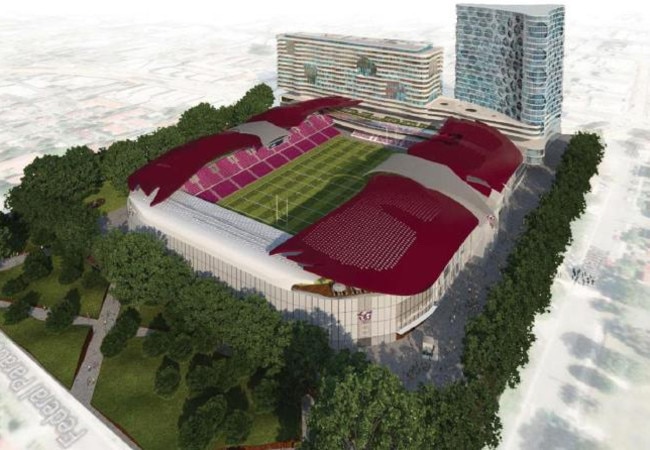 Manly Sea Eagles plans for Brookvale Oval dating back to 2015.

The Sea Eagles are back at 4 Pines Stadium for Sunday night’s vital match against old rivals, Canterbury.
Before the game, Manly officials will unveil the new 3000-seat Fulton Stand at the northern end of the ground, which backs onto a new state-of-the-art Centre of Excellence.
The entire facility cost $33.1 million.

Plans for Brookvale remain confidential but the redevelopment would include demolishing the existing three grandstands and building a modern arena similar to CommBank Stadium in Parramatta.

It would mean the Fulton Stand would join newly constructed grandstands on the remaining three sides of the ground. 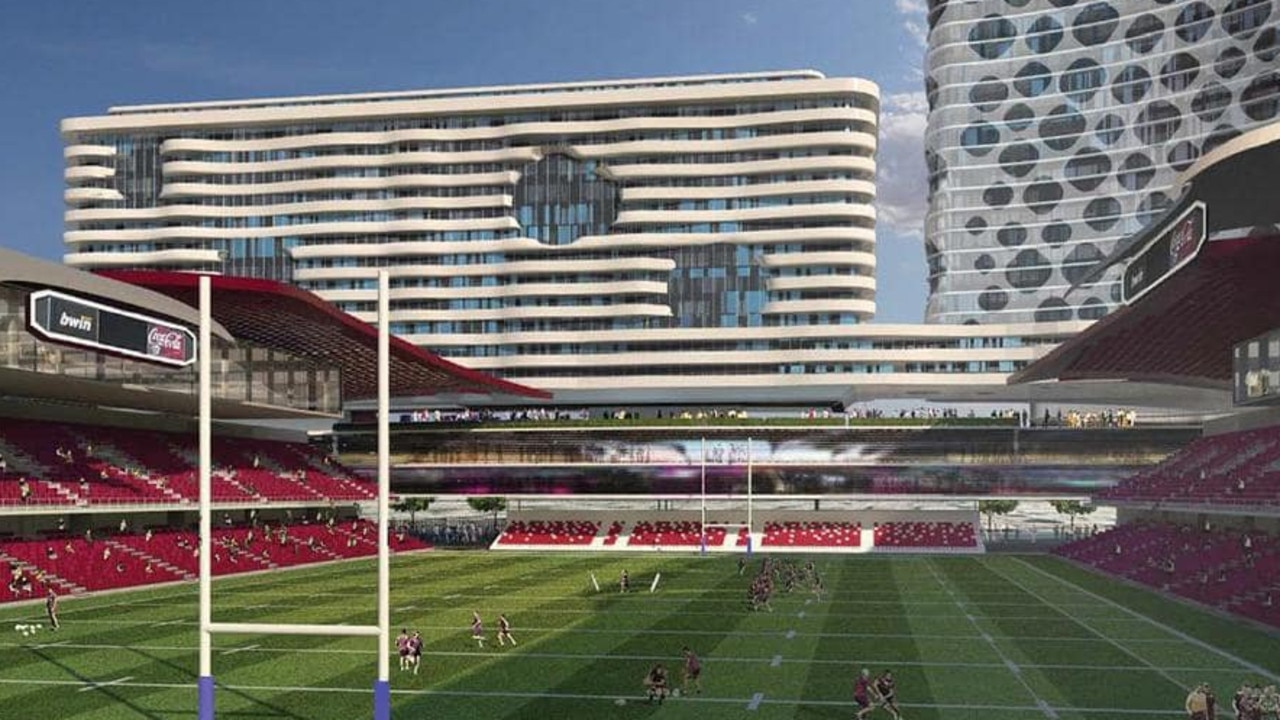 One of the many plans for Brookvale Oval dating back to 2015.

Manly fans have waited three decades for the Brookvale revamp although some even now remain sceptical it will happen. But high-placed sources say the announcement is now “imminent”.
“It will be a substantial upgrade – that’s all I will say,” said the source. “There will be a budget and then a design.”

Another official very close to the redevelopment plans said: “The announcement is very close.”
There was talk the announcement could even happen this weekend but Premier Dominic Perrottet remains on parental leave.

This article contains features which are only available in the web versionTake me there
Costing for the 4 Pines project hasn’t yet been released but some are suggesting the reconstruction could cost up to $180m and take two years to complete.

The NRL and Manly are being kept informed about the development.
Manly hasn’t played at their beloved northern beaches home ground since a round 17 match against Canberra on July 8 last year.

Despite the new Fulton Stand offering modern dressing rooms, Manly will continue using the existing Jane Try Stand sheds. Manly has started moving its administration from its previous Narrabeen base to the new Brookvale facility. The State Government has already announced plans for a full redevelopment of Penrith Football Stadium with construction to start next year. Allianz Stadium at Moore Park is in the final stages of completion.

I won't get my hopes up even when the bulldozers arrive.

As soon as they started work on the centre of excellence I thought the government way is build this, open it and announce a full ground rebuild.
Should have just been a full rebuild instead, why do add ons.

Premium Member
I wonder if the 'source' is the same one that promises an upgrade to Wakehurst Parkway every time it floods?
D

Premium Member
Fingers crossed but many a false dawn

Premium Member
Based on last members Council meeting last year funding will either be sufficient for the the rest of the ground to be developed or new stands similar to COE down Jane Try and Hill - the Arko and Menzies/Lyons will be remain as is.
D

Premium Member
I love old Brookie and the hill, but its time to move forward, I'd love a little mini bankwest

If this is the go, it would be great to have an apartment to look down on it for each home game....I'd be happier than Leo DiCaprio in the Wolf of Wall Street...... About time! Hopefully this comes to fruition ASAP.

Inner West Mayor having a little sook about it.. I hear Perth has a great stadium the Tigers might love. Brookie Bob said:
If this is the go, it would be great to have an apartment to look down on it for each home game....I'd be happier than Leo DiCaprio in the Wolf of Wall Street......

That was the ‘pie in the sky’ concept thrown up by Joe Kelly back in 2015.

None of the imagery in Ritchie’s article matches the current masterplan.

I keep banging on about this, however the Club and Council need a Plan B because I think a complete rebuild in the short-medium term is unlikely. If history is any guide, this will play out over several decades.

Labor, unless they run a candidate or two on the Northern Beaches who then pull off unexpected win/s on the way to forming a new government (1978 was the last time Labor candidates won seats in the M-W district), will have no interest in a rebuild of Brookvale.

Meanwhile the Coalition are heavily focused on the Penrith rebuild, although we are yet to see anything concrete (cough), since the key minister is Ayres. If his efforts on several other fronts are anything to go by, another sh-tfight awaits.

As for Darcy Byrne, they play about three games a year at either of those venues. Blame the joint venture for its lack of resolve in not moving out to Campbelltown - lock, stock and barrel - which would leave Leichhardt swinging.
Last edited: Mar 24, 2022

Brookie Bob said:
If this is the go, it would be great to have an apartment to look down on it for each home game....I'd be happier than Leo DiCaprio in the Wolf of Wall Street......

I'd be queuing up to buy one off the plan if they went with luxury modern apartments over Brookie!
M

Staff member
Premium Member
I thought this c.o.e and new stand was all Brookie was going to get?

Anyway - let the promises roll on and roll in.

I think we're all a bit 'gun-shy' on govt promises.

I am convinced this will proceed.

Shoe1 said:
I am convinced this will proceed.
Click to expand...

So you reckon it's a shoe-in?

Shoe1 said:
I am convinced this will proceed.
Click to expand...