Why do you support Manly?

You are using an out of date browser. It may not display this or other websites correctly.
You should upgrade or use an alternative browser.
N

maxta said:
Grew up in Cronulla and only knew soccer as my older brother made all rep sides and had me addicted to Liverpool in the EPL
Click to expand...

Point of order: I think you mean Liverpool in the old Football League First Division, if we are talking early 80s here (when Les Boyd was playing for Manly). The EPL did not begin until 1992...

Nuttybott said:
Point of order: I think you mean Liverpool in the old Football League First Division, if we are talking early 80s here (when Les Boyd was playing for Manly). The EPL did not begin until 1992...

Because of our past Greatness JBW said:
Grandfather and uncle played reserves in the 60's and 70's.

Its in my DNA to go for this great club. Lived in Collaroy for 35 years before Marrying into the west, but i still make my way over each week. Wife is a Parra fan, she just cant understand why i cant support the Eels when they arent playing us. My answer is simple, my first Sea Eagles memory is the 82 GF and I'll never forgive them.
Click to expand...

Perfectly understandable, I remember as a 7 year old being at the SCG and crying after the final whistle not understanding why our great team had lost. Hated the Slime ever since then!

Premium Member
Born and spent my early years in Forestville so it was a no brainer I would support the local team. Fav players were Phil Blake and later Cliffy when he came across from Norths. My Mum’s side of the family were friends of the Bradstreet family so I would hear stories of when Bill played for Manly in the ‘60s & ‘70s.

What a great thread ! Look at all the generational history and support here. Good on everyone.

My true story is as follows:

Was a massive Bears supporter. If they were still in the Comp as the North Sydney Bears, they'd still be my team simple as that. Friend at work was the actual Bear himself (yep, the dude who wore the Bear suit).

My missus and I went to every home game. Watched all three grades. Knew the players (I mean jesus, Josh Stuart used to come over to my place most weekends as a teenager to hang with my step-brothers - he became a broker believe it or not). Wed sit under the fig, on the fence. Happy times. Greg Florimo literally stopped to thank Jas and I for our support on his last game before retirement, we all cried. Gary Larson was a true gentleman. Glenn Morrison and the newer brigade coming through were mint.

Then the league decided The Bears would merge with our fiercest competitor in Manly Sea Eagles. I was devastated. The team I both despised and respected the most.

So the Northern Eagles was formed.

During this period, the team struggled, and I mean struggled hard, and the infighting was absolutely deplorable, both at club level and between the fanbase, so I gave up all together on the sport.

But then work offered me free tickets. Meh, I'll go I thought, watch the Northern Eagles get flogged, why not ?

At the ground, Jas and I were there, the players all got off the bus (both teams). All the kids were lined up, looking on with excitement and anticipation. The opposition team all walked straight past the kids, and into the ground. The Manly boys got off, and went straight over, and started interacting with everyone, laughing, taking photos. Steve Menzies went over to this disabled boy, spent time with him, kneeled down, took pics, spoke, laughed - this kid was literally cackling in delight. And Beaver spent what I'd say was 10-15 minutes , no fanfare, not wanting people to see and for himself to get kudos, just from his own heart. How could I NOT support a team , that had a player, like Steve The Beaver Menzies in it, and from that moment, I was re-hooked.

Shortly after that, I met Dan, Byso, MankyBacker, Flip, Wheel, Matabele, Clontaago, Chuckwood, Canteen Worker, Pepsi and many others and we'd go to games together, have drinks...we had an amazing little community. Even had a get together at my place one night where Matabele crashed over.

It became a community of like minded supporters who all got on, respected each other, and became proper friends ( @Dan actually one of my best mates).

This club has helped me through some ROUGH periods of my life - they've given me so much entertainment and interaction. They've provided me with life long mates. The Grand Final wins, the highs, the lows - it all comes in cycles.

So I tried to pay back of course. The petition I created (and got lots of help with). 10,000 signatures with comments, taken by Grant Mayer and David Annesley to Morris Iemma to get us that 10 mill. Almost pulling off getting NAB to be the major sponsor, but the CEO at the time (no names) messing it up, and NAB going with the bunnies, but NAB DID meet with him which I set up. The years of Corporate Sponsorship and a Corporate Box. Being a season ticket holder every year.

The Sea Eagles became my blood. And despite the changes in the community here, and the club itself, it will always be my blood. As y'all know, I'll be cremated with a sea Eagles flag...and a dungeons and dragons magic item compendium hahaha. True. But The Sea Eagles are like the mob. Once you're in, there's no wanting out.

Not sure how the Manly thing came about for me as I didn't live in the area but I was supporting them at around 5 years old in the early 80s. I remember cutting up newspapers into small squares to throw the bits of paper into the air at Brookvale (does anyone else remember doing that - seemed popular at the time) when Phil Blake and co scored a try.

Growing up all my older cousins followed Manly.

But what sealed the deal is a legend called Phil Blake came to our school in year 4 as he was good friends with one of my teachers and he was giving out manly stickers and signing school shirts/caps.

I haven't looked back since.

Whilst growing up in the gong I saw wombat play on tele and that was it. He was my footy idol. Always pretended to be him kicking that brown plastic footy around, wearing my manly jumper with the 1 sewn on (thanks mum). I was eight. Now 50 years on
W

Premium Member
Grew up in DY and neither of my parents followed Rugby League.
My godfather was a mad Bears fan and took me to Brookie to see Manly v Bears in 1983 in an attempt to indoctrinate me as a Bears fan. I was just learning to talk and he was coaxing me to say "Go Bears". Luckily Manly was in a mood and thrashed the Bears 54-16 and the fans on the hill took great joy at teaching me to say "Go Manly" instead. Sliding doors moment. I will be forever grateful to those strangers for saving me from the dark side.

Started School in Pymble back in the early 80's you were either a Bears , Manly or Parra Supporter there. I loved eagles , stuck with them ever since kindergarten even when my family moved out to Parra way when i started year 2, all my friends growing up were parra fans surrounding me and most my relatives are doggies fans , but ive been a solid sea eagles fan now 45 years and counting. i love the hate

Since the start of the 1970s, we're now living in Manly's longest ever premiership drought. Never gone more than 9 seasons without a premiership. Until now. (Noting that 2013 was actually a * premiership). 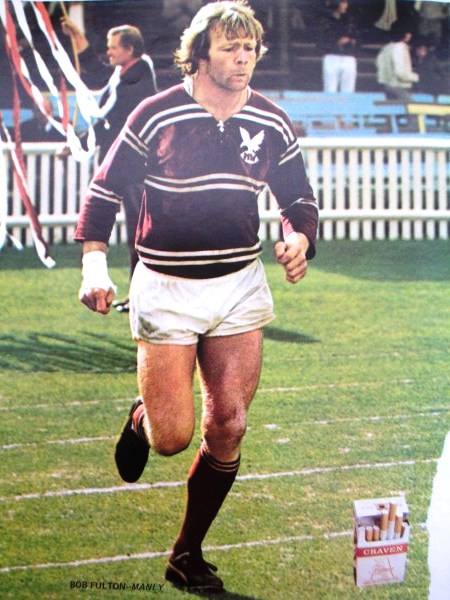 We played in Manly jerseys.

The rest is almost 60 years of history.

It was the amazing run for the win in 1978. I was in primary school then. We had to win game after game and I remember after the preliminary final win against the Magpies the old Manly Daily ran an enormous picture on the back page of a try being scored with the banner headline MANLY'S COURAGE. An incredible time, followed the Sea Eagles ever since.

Being a contrarian at heart (from a very young age) it was the obvious choice to support Manly rather than Cronulla in the '73 GF. The dislike for Manly from most of my classmates at school just reinforced that choice!
L

I know it’s a bit wanky quoting myself but I couldn’t be a*sed retyping my reason as it’s still the same.

Leader of the Flock said:
Well, like Harvies Elbow, as a little tacker of 5 or so, up on the Central Coast without a team of our own, the name "Tigers" sounded great but I didn't really know anything about football as I didn't start playing until I was 6 and around that time a young blonde sensation from the 'Gong started playing for the Mighty 'Eagles.

So, as I was playing half back that first year or so, there was only 1 player that I wanted to be like, the young Bozo; so, it's been Manly for life since then, through thick and thin, against opposition from all my family and I've never waivered for over 50 years. It's still a bit hard to take my dear old Mum(Saints since birth) openly stating that "I hate Manly" every time the Mighty 'Eagles are on the TV, even with me sitting a few feet away.
Click to expand...

Premium Member
It puts a tilt in my kilt.

Hope that doesn't offend anyone.

My dear departed Mother taught me 3 things sitting on her lap ..

1) The story of Glencoe ... and to never trust the Papist Campbells
2) That there are more Englishmen in Bannockburn that Scot's ... happily they are all under the ground.
3) Manly is our new home .. Support Manly in all things

Edit ... First starting taking my son to Brookie in the Northern Eagle Days ... and no mater how bad we went .. he learnt the greatest lesson of All ... stick solid .. he has now seen us win 2 grand finals and goes to nearly every home game ..
Show hidden low quality content
You must log in or register to reply here.
Share:
Facebook Twitter Reddit Pinterest Tumblr WhatsApp Email Share Link