Premium Member
I think the Dogs' salary cap is now calculated in cryptocurrencies.

My tip, Hodgson to parra in 2023 and him not to mesh at all with Moses and Brown

Thats about 6 million for their starting 13. And I've been conservative with some of those contracts compared to the rubbish media prices. So that leaves 3m for the other 17 players. Average of about 170k each. And I'm sure I've missed some players that are on decent coin. A pub somewhere must have some damn loose payouts on their pokies from Mr Laundy.
Click to expand...

That is very conservative mate - but tells a story

And they letting Cotric go because of cap pressure, what am I missing

master blaster said:
And they letting Cotric go because of cap pressure, what am I missing
Click to expand...

"Cap pressure" is a lazy term that sells newspaper articles.

They are letting go of Cotric as they think they can get better bang for their buck elsewhere.

That gives you 500 left, sign a replacement at 350 then you have an extra 150 to tip into the Mahoney fund

BOZO said:
The dogs are spending money like drunken sailors 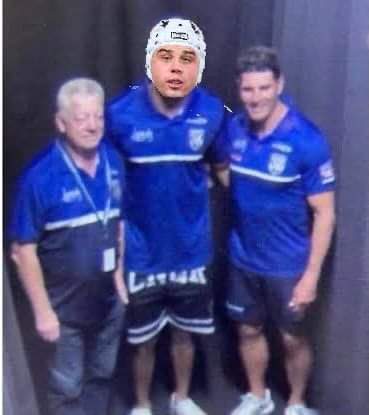 Tipping Comp 2021
They've gone from broke to bottomless pit in the space of a couple of years. Throwing money around as if they,ve got no cap.

Premium Member
And they still have the biggest flog in Barrett. he won't make 2023
D

swoop said:
Can't wait til it blows up in their faces,
The family club no longer exists
Click to expand...

The family club operates out of Brookvale now

I didn't think teams were allowed to sign players and be nominally over the cap, even a year out (2023). I know they say they will shed players but it isn't that easy. I doubt the NRL will register all these contracts until there is clarity on who is going.
E

Disco said:
Wish there was somewhere I could bet on Ciraldo as Dogs coach in 2023
Click to expand...

You know what...that's a pretty calculated prediction that definitely has legs...

Gus’ $5.6m splurge just put the squeeze on the Dogs and left four stars looking over their shoulders​

The Bulldogs’ recent big-fish signings, Reed Mahoney and Viliame Kikau, have raised concerns over the club’s salary cap situation for the 2023 season.

That’s on top of the hefty salaries the likes of Luke Thompson, Nick Cotric and Tevita Pangai Jr stand to earn in 2023.
Mahoney and Kikau take Canterbury’s 2023 roster to a total of 21 players — plus Jack Hetherington and Jeremy Marshall-King have options in their contracts for 2023. That leaves nine spots to fill (if Hetherington and Marshall-King are not retrained) with not a lot of cash to spend.

The Sydney Morning Herald reports that the club will look to promote players from its New South Wales, Jersey Flegg and SG Ball teams to fill those spots.
Canterbury’s general manager of football, Phil Gould told the board on Thursday night that the club is planning on signing up to five players from the pathways teams to the top 30 for 2023, according to the Herald.
The Bulldogs will have plenty of cattle to choose from after it was announced last month that the club will bring back its own New South Wales Cup side next season, while also continuing its partnership with feeder side Mounties.

However, despite the vision to promote younger players from within, there’s fears the club will almost be forced into releasing at least one big-money player before 2023 to ease cap pressure.

According to multiple reports, Nick Cotric, Luke Thompson, Kyle Flanagan and Corey Allan are the players the Bulldogs are willing to let go early.
Cotric joined Canterbury-Bankstown on a rich three-year deal at $650,000-per-season. He was the first big-name player to sign as the club began its rebuild.

However, the 23-year-old has been heavily linked to a return to the Raiders, while he has also reportedly been shopped to the Eels and Wests Tigers.

Thompson had been linked to the Tigers — even coach Michael Maguire confirmed in August there was some interest in the Englishman — but nothing ever came of it. His $800,000 salary is chewing up a great deal of the Bulldogs’ cap.

Meanwhile, Flanagan and Allan are both said to earn $500,000 in 2023 — a startling amount given both aren’t guaranteed to land a spot in coach Trent Barrett’s 17.

However, there seems to be little interest in the pair from rival clubs.
Unless the Rugby League Player’s Association can negotiate an increase, the 2023 salary cap will be $10 million.

The Daily Telegraph claims the Bulldogs’ 2023 roster has already taken up close to $8.85 million, leaving just $1.15 million to fill the remaining spots. However, add in Mahoney’s salary and that figure drops to $500,000.

A minimum deal starts at $80,000.
Gould’s plan to fill half of the final spots with low-money deals for players from the pathways system leaves big question marks over the future of several players that come off contract at the end of 2022.

Matt Dufty and Paul Vaughan have just joined the club on one-year, lowball deals looking to revive their careers. If both players have a good season, their value will increase — but the Bulldogs won’t have the cash to keep them both.

As is the case for Raymond Faitala-Mariner, who is expected back from a foot injury in the early rounds of next season.

I won't begrudge thier long suffering fans for a glimmer of hope finally
Except for the Muppets claiming they are finally rid of haslers stuff up.

I think we all know that no matter how many big name signings they announce, they'll still fail, because they dont have a spine (although Mahoney is a good start in that department.

JAC supposedly wants to play fullback - if they play him there, then he's untested.

Kikau will use the Bulldogs as his pension after winning a premiership.