Minutes ago the Vancouver Canucks became the last Canadian team standing in the 2020 playoffs when they clinched the best of seven games series 4-2 against defending champions St Louis blues with a 6-2 victory in Friday's game.

It was an amazing series with the Canucks heading to round two of the playoffs for the first time since 2011. They now face the top seeded Las Vegas Knights who are looking supremely sharp, fit, and dangerous.

Not many gave the Canucks a chance in this series. The Blues are big, tough and experienced. Their mantra is "wear them down and roll over the top of them."

The young Canucks team have some very good players but as yet only one superstar, Swede Elias Petterson and they had to battle a far more experienced team saturated with trophy winners.

A real David v Goliath battle where in game one the Canucks let it be known that you may knock us down, but we'll keep getting back up again. They not only did that, but they pushed and shoved and agitated and hit as good as they got.

I don't normally go on about series win (because only a few read and less comment) but this was a real tough and gutsy series win. Every Canuck fan can be proud at every one of the players.

The Canucks dominated so well in the final game that the superstar goalie, Binnington, for St Louis was replaced have way through the second period.

The damage was done with a 3 goal, 5 minute burst from Vancouver and the final score of 6-2 was the largest of the series.

This certainly could have been written more eloquently but it's late and I'm too damn happy to wax lyrical until perfection is achieved! 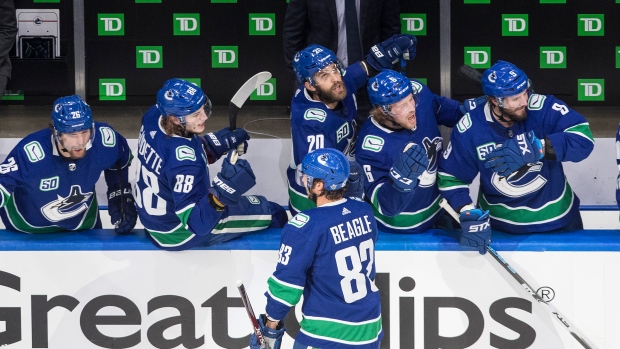 Vancouver Canucks advance to Round 2 with Game 6 win over St. Louis Blues - TSN.ca

The Vancouver Canucks advanced to Round 2 of the Stanley Cup Playoffs Friday night after defeating the defending champion St. Louis Blues 6-2 in Game 6 of their opening-round series.