I don’t think Kenty is really a fan of scam’s new book.

Can't see the article 'cause of the not paying for it thing, but if anyone can post a snippet, it might be worth a laugh.
Scam reminds me a bit of Donald Trump. Understands the people that love him but just can't believe there's people that don't.
Purple Fwit!
L

Paul Kent: Cameron Smith struggling to handle the truth in fallout over his autobiography
Cameron Smith’s autobiography has caused a huge stir in the NRL and he’s hurting his reputation even more by continuing to rewrite history, writes Paul Kent. 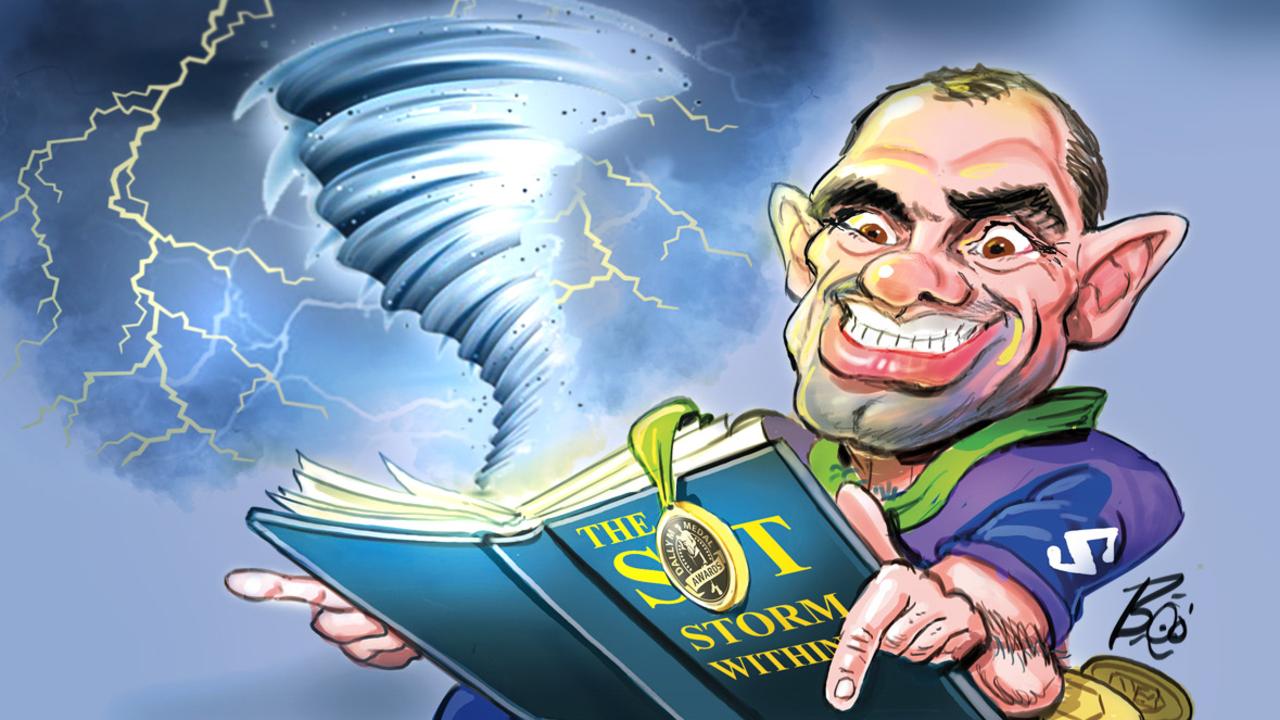 Boo’s take on the Cameron Smith furore.
For many years he suspected everybody and forgave nobody. As the champion of his field, that was his world.
In just a week it has nearly all turned around.
If the publishers want to salvage what is left of Cameron Smith’s $400,000 advance for his autobiography, the chances of which diminish by the day, then somebody must tell him to stop talking.
Watch The State of Origin III Full & Mini REPLAY on Kayo with no ad-breaks during play and Fox League Commentary. New to Kayo? Get your 14-day free trial & start streaming instantly >
Smith is rapidly being recognised as a self invention.
He continues to rewrite history, each day bringing a new version as Smith struggles to grasp what is truth and what is refuted.
As late as Thursday night Smith was on the ABC TV’s 7.30 program, where he received no cross examination, putting across a version of truth that is completely untrue, as it was in all the days previously.
“Unfortunately some of the excerpts in my book were printed in a way that were a little bit misleading,” he told 7.30.
How so, is ridiculous. They were excerpts, cut and pasted straight from the manuscripts. 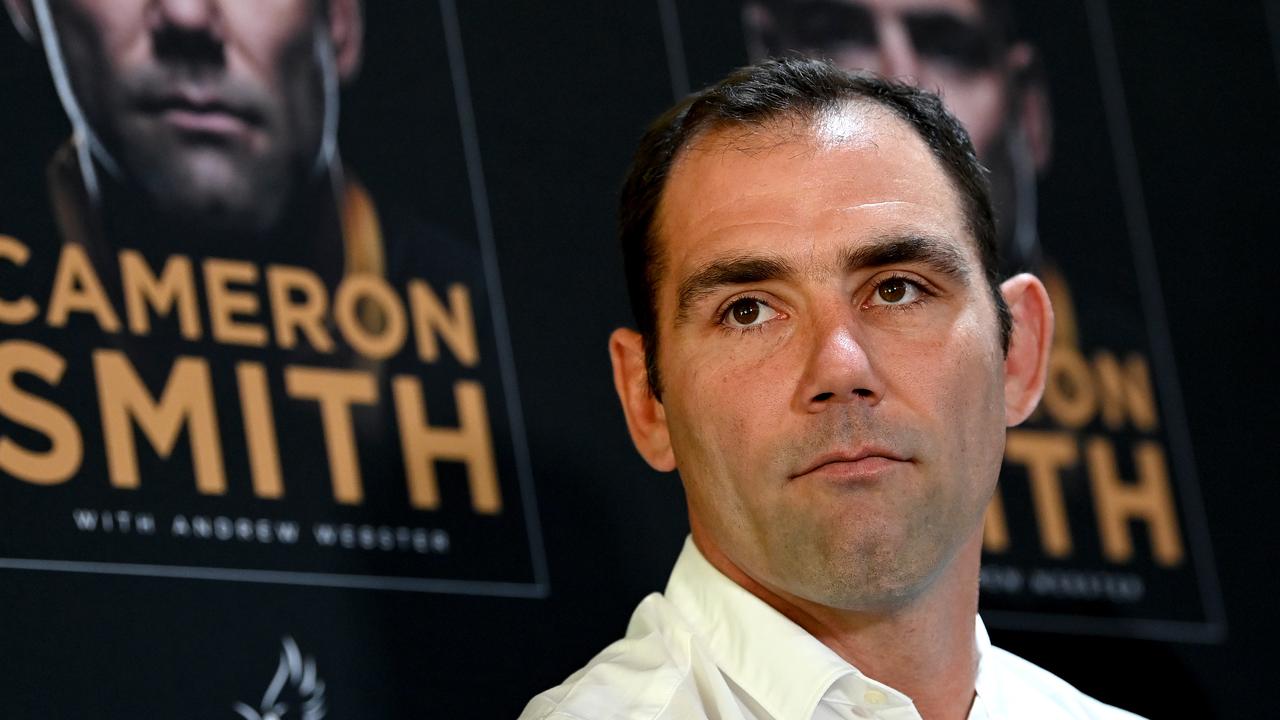 Cameron Smith at Suncorp Stadium this week to promote his autobiography. Picture: Getty Images
Each story written told about Smith’s criticism of Gallop for punishing the Storm because Smith, in his book, wrote: “My anger is mainly directed at the NRL for the penalties they handed down and the way the whole matter was handled. And for that I blame David Gallop.”
Yet the great rewrite of history continued.
Smith, still on 7.30: “My frustration was the way in which it was handled, where, it was a salary cap breach that was uncovered and punishments were handed down before any investigation had started.”
Gallop had already put this right by Monday, so angry after reading Smith’s extracts he volunteered to write for the Daily Telegraph: “The situation at the Storm was under investigation for months.
“Our investigation had uncovered evidence of substantial non-disclosure of player payments putting the Storm over the cap for a number of years, including evidence of a dual-contracting system being used for champion players.”
Smith attacks Gallop while refusing to acknowledge he had one of those dual-contracts.
The great revisionists like Smith have a tremendous ability to subtly shift the point of argument, like Smith switching from the injustice of Melbourne’s titles being stripped, for which there is no defence, to the timing of the penalties.
He does not recognise the NRL was six months into the investigation when the Storm were kicked out of the 2010 for premiership race. 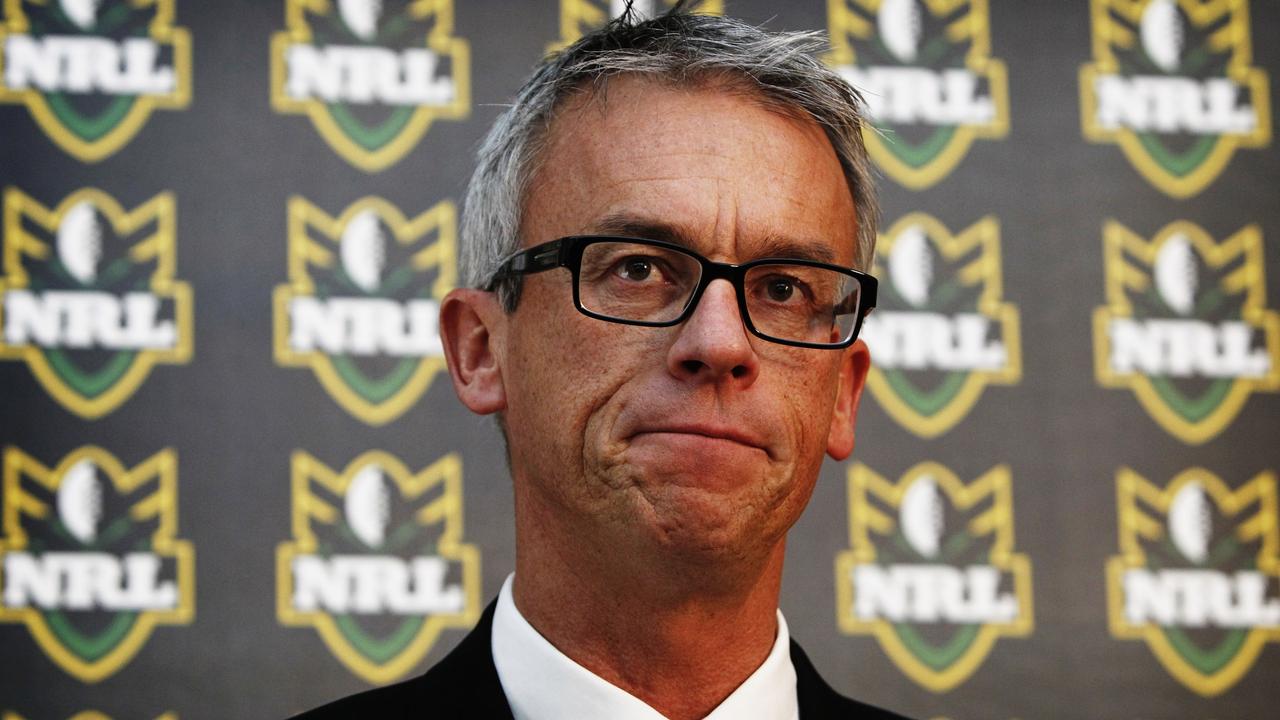 David Gallop was angry with comments made by Cameron Smith in his autobiography about the NRL handling of Melbourne Storm salary cap investigation.
Or does he acknowledge the NRL had so much information that when Storm chairman Rob Moodie was ordered to Sydney he immediately confessed, even though the full extent of cheating would not be revealed for 12 more months.
“And unfortunately,” Smith continued on 7.30, “assumptions were made that many people in our club had knowledge about what had gone on. It was just completely false.”
Dear oh dear. Not only has Gallop confirmed the NRL had evidence some of the “champion” players, such as Smith, knew what was happening, the NRL also had concrete evidence several staff did, as well, even though the Storm have conveniently let blame sit with then-chief executive Brian Waldron.
To believe that Waldron, six months in the job after a career in the AFL, knew the contract values of players intimately enough to act alone is the height of fantasy.
The NRL gave the Storm a break, choosing not to prosecute those individuals, including Smith, personally, under the belief that stripping their two premierships was punishment enough.
Yet Smith has continued spending his week forgiving nobody.
He downplayed his fallout with Cooper Cronk, even after it was known throughout the game they stopped speaking when Cronk left the Storm.
Smith told The Australian on Thursday: “The story saying he is upset that I didn’t attend his wedding, Cooper has never said that to me … To say I don’t want to be friends with Cooper, that is not true.”
Again, more diversion.
They have no contact with each other because Smith stopped talking to Cronk. If even a thread of friendship still existed, why wouldn’t Smith ring Cronk and ask if there is a problem? He has not.
His book brought Wayne Bennett into the argument, breaking out Bennett’s criticism of the Storm’s wrestling in 2008 and then suggesting that Bennett was coaching wrestling when he entered Origin camp in 2003. 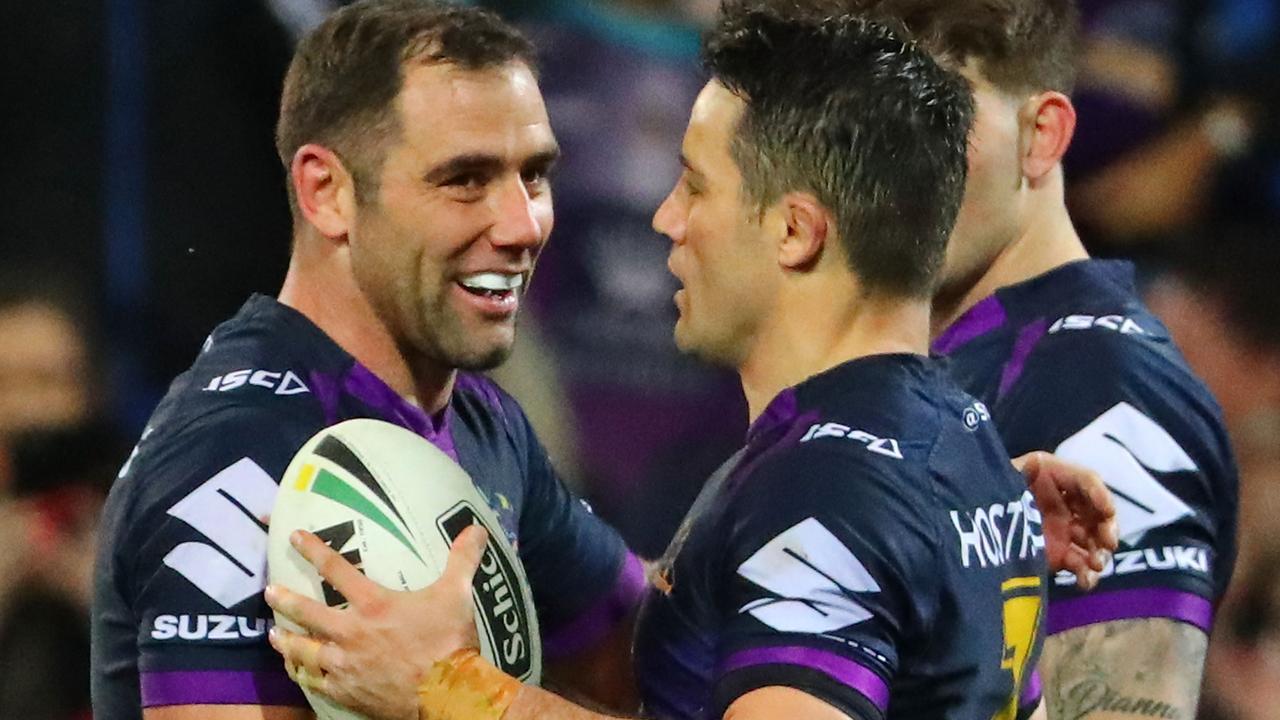 Smith downplayed his fallout with Cooper Cronk in his book. Picture: Getty Images
Bennett ridiculed Smith’s suggestion at a Queensland press conference on Tuesday.
Smith manipulated it again in Thursday’s Australian.
“Someone questioned Wayne and said ‘Cameron Smith had a go at you, saying you brought in wrestling.’ I didn’t say that,” claimed Smith.
Claiming Smith “had a go” at Bennett was a smokescreen to explain Bennett’s response.
The question, from Nine reporter Ben Dobbin, was not bait: “Wayne, Cameron Smith has released a book and you have been mentioned in it regarding some of the tactics around wrestling. Will you comment on what has been said, or your involvement?”
Smith might well have played himself right out of favour in Melbourne, too.
“On many occasions throughout my career, the club told me they were under salary cap pressure, and asked me to make small personal sacrifices by deferring payments, which I agreed to,” he wrote in his book.
Deferred payments are illegal in the NRL. They have been since the Storm was stripped in 2010.
NRL boss Andrew Abdo said on Friday the NRL believes Smith was talking about the period when the Storm was stripped of its premierships.
“The Storm, like every club, get audited and we have got a pretty slick team around it now,” he said.
Still, with every word hard to trust, it appears the NRL has no choice but to have a deeper look.

Well after reading that my opinion of cam has not changed.

Now they want to challenge the punishment

A decade on, the fallout of the Melbourne Storm salary cap scandal is still ongoing and there is a fresh appeal to have the handling of the situation and penalties re-examined.
www.foxsports.com.au

That hole he's digging himself into is getting deeper. It just needs filling in now.

Stupid prick , he’s been copping it everywhere surely just one big testimonial was enough extra cash for him on top of his football and TPA’s!!
Last edited: Saturday at 8:52 AM
H

niccipops said:
Can't see the article 'cause of the not paying for it thing, but if anyone can post a snippet, it might be worth a laugh.
Scam reminds me a bit of Donald Trump. Understands the people that love him but just can't believe there's people that don't.
Purple Fwit!
Click to expand...

A better read than what the book would be.... Just showing what a pig headed, ignorant f#ckwit he really is..... You'd have to be worried signing him for one year at the Titans, his ego has taken over and is out of control
C

manlyfan76 said:
Now they want to challenge the punishment

A decade on, the fallout of the Melbourne Storm salary cap scandal is still ongoing and there is a fresh appeal to have the handling of the situation and penalties re-examined.
www.foxsports.com.au
Click to expand...

The NRL SHOULD reassess the penalty given to the Storm in light of those given to the Eels and the Sharks, and increase the penalties on the latter two. Take away the Sharks premiership and give the Eels extra spoons. Let’s see how that goes down.

To be fair to the Storm the Eels should have been hit much harder. There was no evidence of the Storm discussing ways of cheating the cap at board meetings.

All hail Kenty .. the really big part of it for me was the "suggestion" that Cam and the others that claimed ignorance .. knew all along ... Kenty knows it, they know it, we know and it appears the NRL also knew it ..

Look, i havent and never will buy the book. Or even get it for FREE from the library. BUT i have a question that has been nagging me for ages...has ANYONE ACTUALLY ASKED Cameron STRAIGHT OUT if he signed dual or multiple contracts (IF cameron is included in that "champion players" category) and if so what was his response?
C

Bulli Eagle said:
Look, i havent and never will buy the book. Or even get it for FREE from the library. BUT i have a question that has been nagging me for ages...has ANYONE ACTUALLY ASKED Cameron STRAIGHT OUT if he signed dual or multiple contracts (IF cameron is included in that "champion players" category) and if so what was his response?
Click to expand...

while not saying he was one, either kent or slothfield did say that cronk was not one, also kent mentioned that smith had house renovations paid for by the storm

Leader of the Flock said:
I don’t think Kenty is really a fan of scam’s new book.

Is it a colouring-in book or join-the-dots?

So this guy is a future immortal? Pffttt!!! What a disgrace! No morals, no ethics, trying to make out that he is the victim and its never his fault!! Yet never takes ownership or responsibility for his mistakes and misjudgements! He and his club as successful as they are , are also a blight on the game in that it is all about winning at all costs!

This pelican has spend so many years having the media blow smoke up his clacker and with every TV show trying to out do each other praising him as a god like entity ... GreenTurd and the NRL giving testamonials years before he retires and rings to his wife ... simply because she is his wife ...

That I actually believe he thought that was what everybody thought of him ... I genuinely believe that the news that he is universally hated by many in the game is coming as a great surprise to the numbnut ...

wedgetail eagle said:
Is it a colouring-in book or join-the-dots?
Click to expand...

Colouring in. sCam has recently shown that he doesn't like people joining the dots and prefers his own reality.