Wests Tigers have officially called off their ‘Fox’ hunt, sensationally withdrawing from the race to sign Josh Addo-Carr.

It comes after Canterbury tabled a four-year offer worth in the vicinity of $2 million for the player rated the world’s best winger for 2022 and beyond.

But Tigers chairman Lee Hagipantelis was clearly bemused at speculation the Bulldogs’ lucrative offer had caught his club off guard.

It is understood the Bulldogs made their offer early last week after Addo-Carr had earlier toured the club’s Belmore headquarters.

It is speculated Addo-Carr has a strong desire to play with South Sydney, while sources suggest Newcastle is also making a late play.

One of rugby league’s most controversial, and colourful, careers has come to an end with Sandor Earl announcing his retirement from the NRL.
www.foxsports.com.au
​

One of rugby league’s most controversial, and colourful, careers has come to an end with Sandor Earl announcing his retirement from the NRL.​

The 31-year-old broke the news to SEN’s Jimmy Smith on radio on Friday afternoon.

Earl retires with only 56 first grade games to his name from a career that began way back in 2009 and promised so much.

“I haven’t announced it, so it’s a bit of a scoop, but I’ll be hanging up the boots,” Earl said.

MADGE AND THE BADGE

The Wests Tigers have hired retired referee Gavin Badger as a coaching consultant. He will work with the team in the off-season and next year.

Former NRL referees boss Bernard Sutton has decided to leave rugby league and start a new chapter in his career outside the game.

Arch rivals Wests Tigers and Penrith are close to making a player swap with two promising youngsters for next season.

Relations between the clubs have been frosty since Ivan Cleary moved from the Tigers to the Panthers but a deal looks set to be done in coming days that will suit both clubs.

The Tigers have already signed talented Panthers fullback Daine Laurie for 2022 but under the proposed switch, he would make the move immediately.


In exchange, the Tigers would give the Panthers 20-year-old centre Zac Cini.

Tedesco extends for 3 years at Rorters. 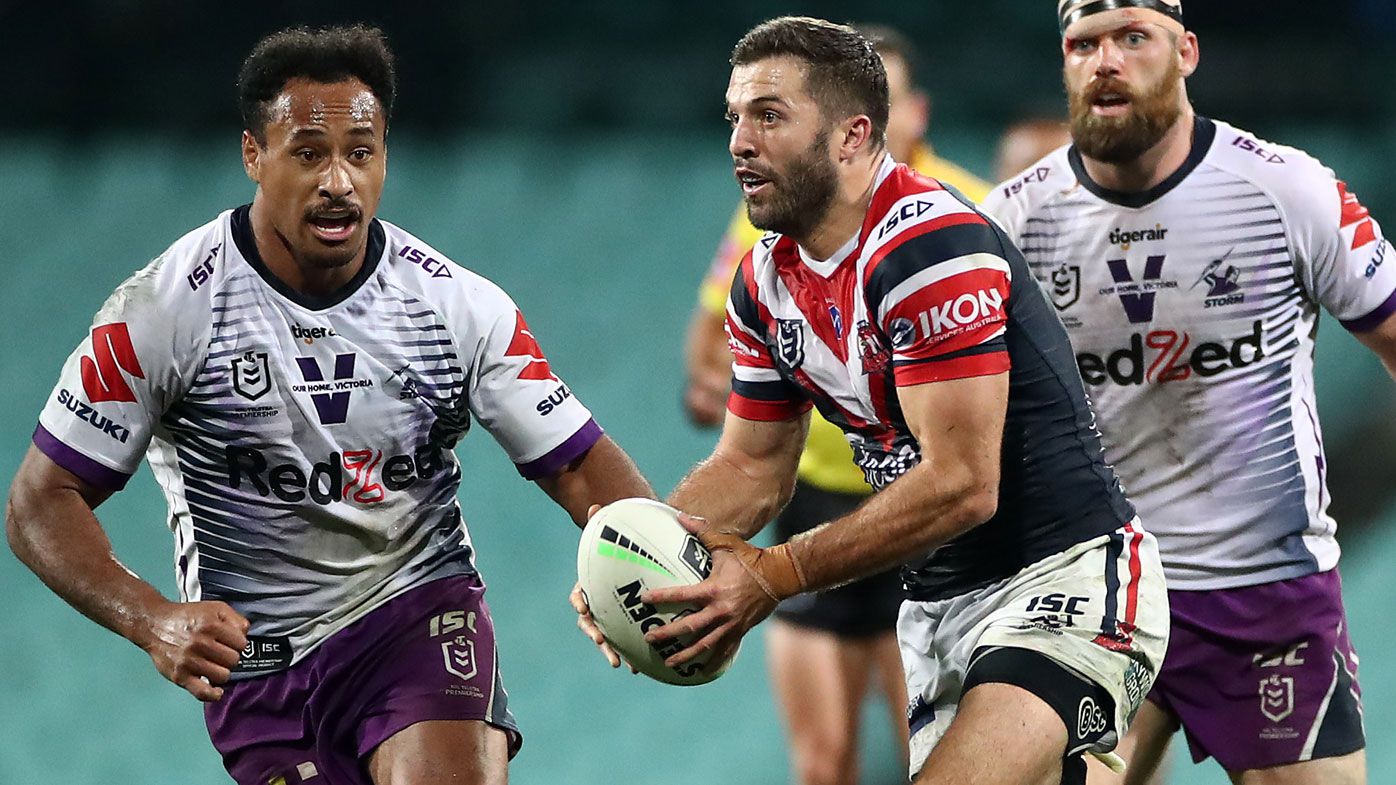 The player agent of a Storm gun has shopped his client to 14 NRL clubs, with the email revealing the star would be granted a shock early release.


It’s the secret email sent to 14 clubs on Monday revealing NRL grand final star Brandon Smith will be granted a shock early release from Melbourne Storm.
The Daily Telegraph secured a copy of the letter which details Melbourne’s decision to allow their champion hooker to leave after next season provided the club secures “commensurate compensation” in return.

The return of Wests Tigers hooker Harry Grant has prompted Smith to look for another club with his manager, Stan Martin, saying in the email his client wants to “play exclusively at hooker”.

Smith, 24, will remain at Melbourne next season before seeking a release from the final year of his deal in 2022. He is currently earning around $425,000 a season but could attract more money on the NRL open market. 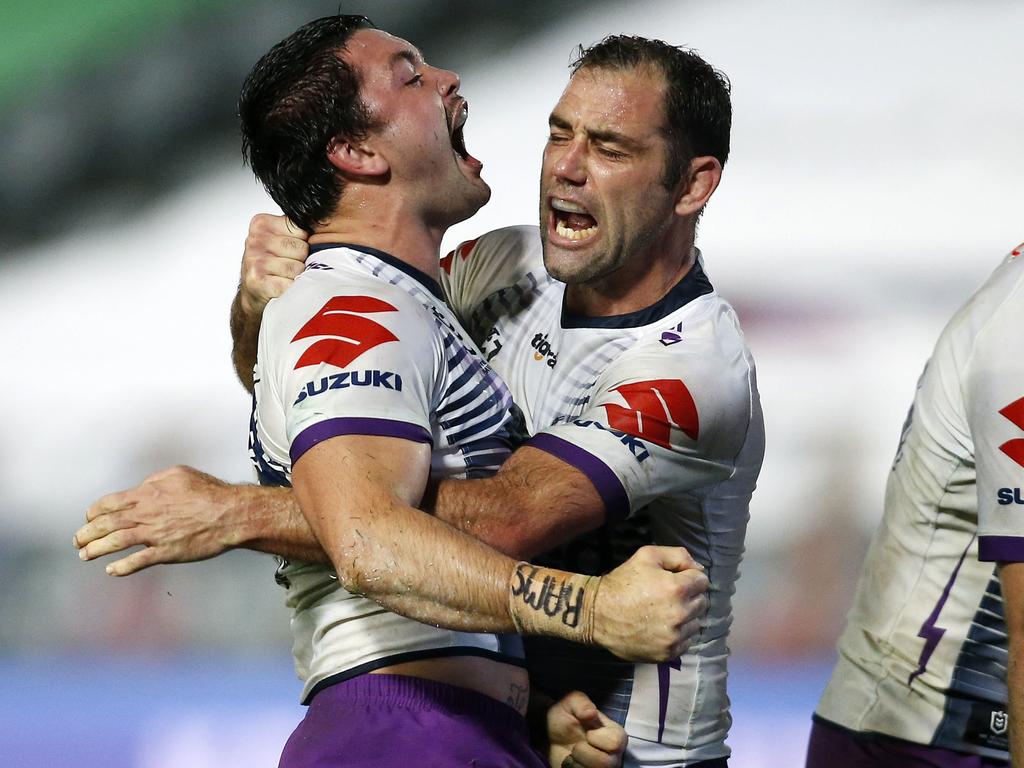 One source told The Daily Telegraph that he believed a high-profile Sydney club was prepared to release a representative prop to Melbourne in exchange for Smith, the New Zealand Test hooker.
Some club officials believe Smith is being pursued heavily by one club but Martin wants all clubs to be aware his client would be leaving Melbourne early.
Canterbury, Wests Tigers, New Zealand and Newcastle have been touted as clubs that could show an interest in Smith.
While Smith has entered an elite class in the NRL, it is generally accepted Grant would become Melbourne’s number one hooker with Cam Smith set to retire.
Smith has developed into an outstanding middle forward and dummy half.

Strangely, no officials from Gold Coast – a club who would likely be interested in luring Smith to Robina - were on the list
Martin’s email reads: “Please note that after advising the Melbourne Storm that Brandon Smith would be looking for a release due to issues surrounding his desire to play exclusively at hooker.
“The Melbourne Storm has given us permission to look for another club based on (certain) conditions.”
His email then provides two paragraphs attributed to Melbourne Storm.
It reads: “Further to previous communications with the club, I can confirm Melbourne Storm grant permission for Brandon Smith to discuss his playing options for the 2022 NRL season with other clubs.

“In order to achieve this, part of any arrangement moving forward will need to include commensurate compensation for Melbourne Storm, given Brandon’s contractual status, his playing ability and representative status.”
Martin finishes by saying: “If there is any interest in Brandon, please contact myself at a suitable time.”
NRL clubs were busy contacting each other on Monday night to discuss the Smith situation. One recruitment manager said: “He’s on $425,000-a-season but he could get more on the open market.
“I hear there is a representative front-rower that a club would be prepared to release Melbourne. It’s an interesting one.”

One NRL club chief executive is adamant Smith has already decided to join a Sydney-based club.
“I reckon he has a club. He has his buyer. But they are sending it out to everyone in case a club is looking to move a player that might satisfy Melbourne and then the Storm would allow Brandon to leave,” he said.
The cult hero nicknamed The Cheese made 14 runs for 112 metres and completed 18 tackles in Melbourne’s grand final win over Penrith.
He delivered a typically hilarious interview after the match.
“It was pretty good, I mean I played pretty **** tonight but I got the ring,” Smith said. 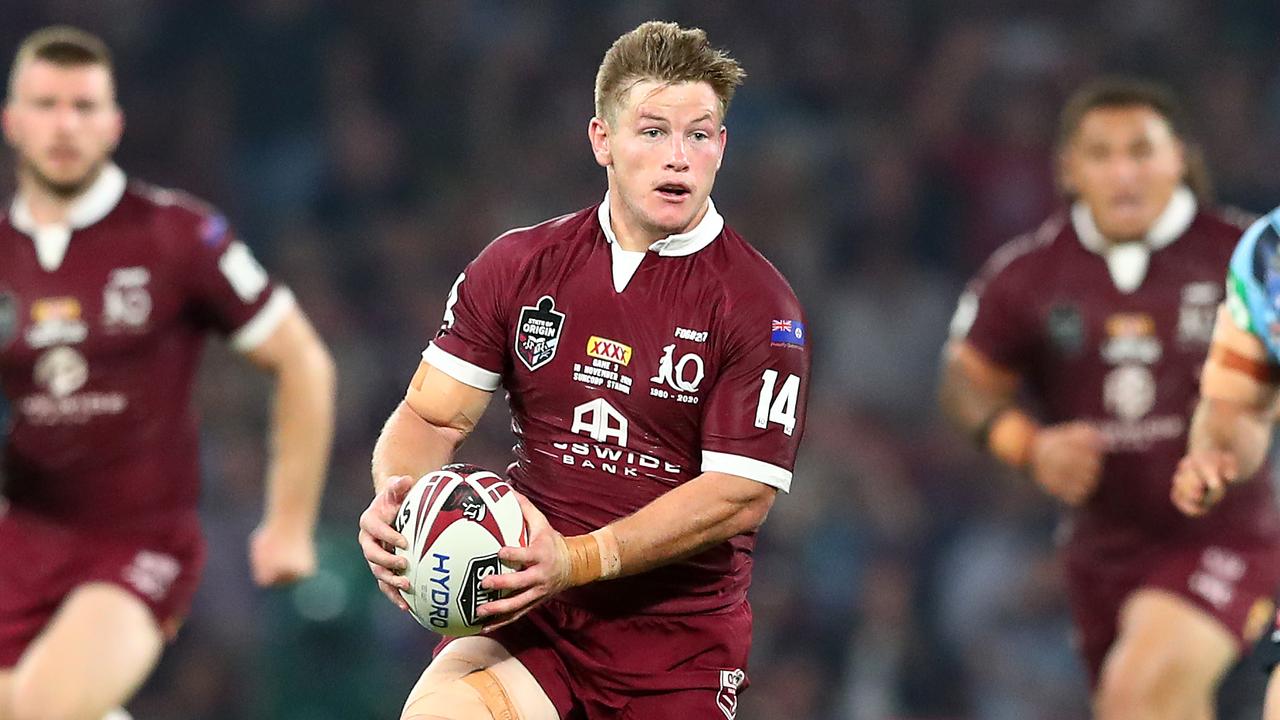 Harry Grant is likely to take over the hooking role from Cam Smith. Picture: Chris Hyde/Getty

“It’s for sale, I need to pay for all the beers I’m about to drink.
Smith was full of praise for the future Immortal he’s been stuck behind in the Storm pecking order.
“To the captain, I hope he can play on,” Smith said.
“I know it’s a tough situation for me but I wouldn’t want him carrying me to another couple of rings, I don’t think we should force him out of the game.
“To Craig, he does nothing pretty much all year. Smithy does all the coaching, (Bellamy) is getting paid lots of money to do piss all.

The Rabbitohs have added a classy depth signing to their backline, with the injury-plagued career of centre Tautau Moga getting a fifth destination by the age of 27.

As a teenage phenom Moga was compared to Israel Folau and Greg Inglis but he has rarely lived up to that hype after hitting injury hurdle after injury hurdle in a 73-game NRL career that has stretched over nine seasons.

South Sydney looms as a potential last-chance saloon after a frustrating three seasons at the Knights yielded just 14 games.

Anderson was part of Manly’s NRL Development squad for 2021.

The Wests Tigers have confirmed coach Michael Maguire has extended his contract with the club until the end of the 2023 NRL season.
Already contracted with the club for the 2021 season, the two-year deal will begin from the start of the 2022 season and will see Maguire become the second-longest serving coach in Wests Tigers history Tim Sheens.

A two-time Premiership-winning coach with Wigan (2012) and South Sydney (2014), Maguire joined the Tigers at the start of the 2019 season on a three-year deal.

The Wests Tigers have confirmed coach Michael Maguire has extended his contract with the club until the end of the 2023 NRL season.
www.foxsports.com.au

Danny Levi to the Salford Devils in the ESL.

No great surprise I guess.

Well-placed UK sources have told The Daily Telegraph the Rhinos are preparing a three-year offer for Tetevano worth $1.5m.

Storm viewing Coates as 2022 replacement for the Fox? Could Malakai Watene-Zelezniak be on his way to Canterbury?

I had hoped for both at manly...